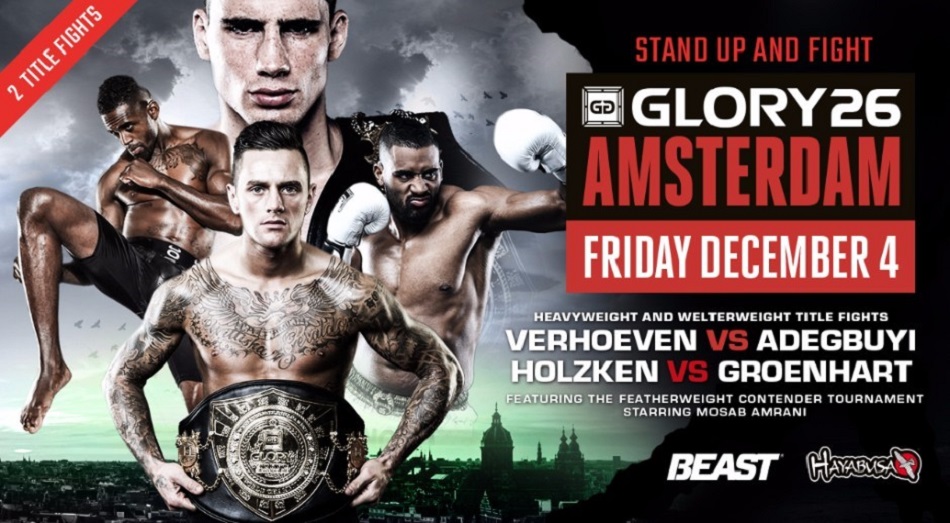 In the headline bout of GLORY 26 Amsterdam, the first of two world titles is on the line as GLORY Welterweight World Champion Nieky “The Natural” Holzken (87-11, 46 KO) defends his belt against Dutch-Surinamese striker Murthel “The Predator” Groenhart (58-18-3, 33 KO).

Representing a rematch long in the making, the two were originally scheduled to do battle for the second time at GLORY 19 Virginia in February, before an injury sidelined Groenhart. Instead, “The Predator” defeated Nicola Gallo and Kharim Ghajji last week during the one-night, four-man Welterweight Contender Tournament at GLORY 25 Milan, securing his opportunity to avenge the 2010 loss to Holzken and capture GLORY gold.

No. 1 ranked Adegbuyi, who faced Verhoeven at GLORY 22 Lille in June, earned the rematch by defeating Mladen Brestovac and Jahfarr Wilnis in an exciting one-night, four-man Heavyweight Contender Tournament at GLORY 24 Denver in October.