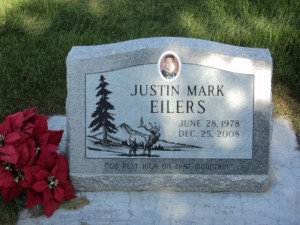 Justin Eilers (June 28, 1978 – December 25, 2008) was a professional mixed martial artist, formerly with the UFC, WEC and EliteXC. He trained with Miletich Fighting Systems in Bettendorf, Iowa.

Justin Mark Eilers was raised in Nampa, Idaho, and developed an early love of football. He began wrestling in the sixth grade and through high school, but he missed a football scholarship out of high school due to his low SAT scores, and soon took up karate at a local school. He began competing in small full contact shows around Idaho, where he met up and coming fighter Jens Pulver, who was fighting with the same promotion. Eilers was also friends with Mike Kyle and taught Kyle jiu-jitsu techniques when Kyle was a sophomore in high school. Eilers would actually end up fighting Kyle at UFC 49. 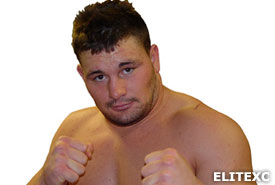 After being accepted to Butte College near Chico, California, Eilers left mixed martial arts behind for football, and was recruited by Iowa State University as a linebacker. He would go on to play for Iowa State for the next four years, After college, Eilers took time off to fully heal a shoulder injury. It was during this time that he had another chance meeting with Jens Pulver, who was now a popular fighter in the UFC. Pulver urged Eilers to try fighting again, and after a few months of training, he made his MMA debut in 2002 facing UFC Hall of Famer Dan Severn at Victory Fighting Championships 3 (a local Iowa MMA organization). He would lose the fight via decision, but the experience pushed Eilers to focus full-time on the sport of mixed martial arts. Just one month later Eilers returned to MMA competition, taking a quick KO victory over Jeff Gerlick at an Extreme Challenge event.

Eilers went undefeated in his next four fights, before losing a close split decision victory to Cabbage Correira at SuperBrawl 30. Coming off the loss to Cabbage, Eilers won his next five fights, all by KO, and was signed by the Ultimate Fighting Championship in 2004. His first fight in the octagon was against an old friend from high school, Mike Kyle at UFC 49. Eilers knocked Kyle out in just 1:14 of the first round, but was suspended after the fight by the Nevada State Athletic Commission due to injury sustained to his hand in the fight. He returned in February 2005 at UFC 51 to face top heavyweight contender Paul Buentello. Three minutes into the first round, Eilers was caught by a right hook from Buentello, which ended the fight. Four months later at UFC 53, Eilers would get a title shot, facing Andrei Arlovski. Unfortunately he would suffer another KO loss at the hands of the UFC Heavyweight Champion Arlovski. Eilers suffered extensive injuries in this match, breaking both hands, his jaw, and tearing his ACL.

Following his loss to Arlovski, Eilers took eight months off, and returned to the octagon at UFC 57 to face Brandon Vera. In yet another brutal knock out, he was dazed by a high kick to the top right side of the head and then dropped by a vicious knee to the same area. Eilers was released from the UFC in 2006, and returned to MMA competition at Combat in the Cage 2, finally scoring a KO victory (his first victory in almost 2 years) over Sherman Pendergarst. 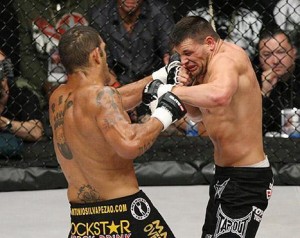 His last fight was against Antonio “Bigfoot” Silva at Elite XC: Unfinished Business on July 26, 2008.  Eilers would lose via TKO at 0:28 seconds in the second round.

At 10:45 p.m. on December 25, 2008, Eilers was shot during an apparent domestic dispute by his stepfather, 48-year-old James Robert Malec, at Malec’s and his mother’s residence in Nampa, Idaho. He died from a single gunshot to the chest. Malec, a former correctional officer, was arrested and charged with second-degree murder.

Eilers leaves behind a son, who was also in the home that night. Malec was convicted on the lesser charge of manslaughter and sentenced to 15 years in prison.