We have a very compelling feature fight this weekend at UFC 256, as lightweight talents Renato Moicano and Rafael Fiziev battle it out on the main card of an extremely stacked night of fights.

This whole card is as exciting as they come, and this bout’s no different. This is the perfect elite striker versus elite grappler match up. 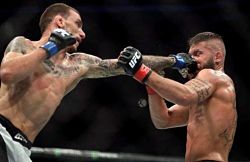 Rafael Fiziev came to the UFC last year in April with a 6-0 record, and was defeated (TKO) by Magomed Mustafaev just 86 seconds into round one. He’s since rebounded however, winning his last two straight over Alex White and Marc Diakiese, both via unanimous decision.

That defeat to Mustafaev was devastating, but he came back better and put on two stellar performances, winning all six rounds he’s fought since. It’s honestly surprising the way his UFC debut went. Though he fought a straight up assassin, he’s no stranger to the moment, and his striking as about as good as it gets. 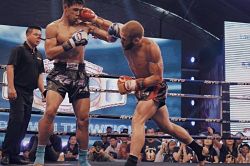 Before transitioning to mixed martial arts, Fiziev was a world class kickboxer, finishing off his career with a record of 39-8 when he was just 24-years-old. It’s crazy the amount of fights he’s had in such a young career, and he’s still just 27-years-old today.

Renato Moicano, 31, came to the UFC back in 2014 with a record of 9-0-1, and within two-and-a-half years, he went 3-0 in his first three fights, defeating the likes of Tom Ninimaki (rear naked choke), Zuba Tukhugov (split decision), and Jeremy Stephens (split decision). 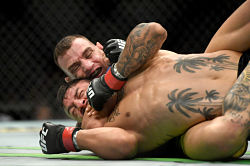 He’d already defeated two incredibly skilled featherweights in Tukhugov and Stephens, and he submitted Ninimaki, who’s a very highly touted grappler. Moicano has that black belt in Brazilian Jiu-Jitsu certainly under Alex Leleco to thank for that.

Moicano lost his next fight to Brian Ortega, being submitted (guillotine choke) in the middle of round three, a fight he was doing very well in. If he didn’t get stopped right then, he may have ended up winning that decision.

He then defeated Calvin Kattar (unanimous decision) and Cub Swanson (rear naked choke), before being TKO’d by both Jose Aldo and Chan Sung Jung in his next two fights, bringing his record to 13-3-1.

Moicano rebounded from this the way many talents do, by changing weight classes. All but his last fight were contested at 145 lbs, but he did look incredible in his first lightweight bout. 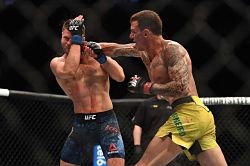 As previously stated, this is a classic striker versus grappler match up, but Moicano has some pretty good striking of his own, his Muay Thai is at quite a high level, he does have a black belt in it. His kicks of all sorts are always a problem for his opponents, given how good he is at them, and how rangy of a fighter he is.

He also has some great jabs, crosses, check hooks, he’s technical with everything, Moicano’s a very well rounded talent. It’s tough to predict that’ll be enough for him in this fight however, Fiziev is a lethal striker, not just a technical one. 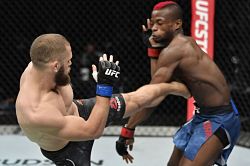 This is going to be a telling battle for both men; to tell whether or not lightweight is the right division for Moicano, and to tell just how good Fiziev is at this point in his career.

Moicano was still a top ten featherweight going into his last fight with Hadzovic, it’s very likely he’ll be able to replicate that success in a weight class above.

We just don’t know too much about Fiziev yet. We haven’t seen his ground game, but we obviously know he’s a killer on the feet. It’ll be interesting to see how he does in the grappling exchanges against Moicano, Fiziev could have his back taken so easily by fighting him.

Moicano stands 5’11” and boasts a 72” reach, while Fiziev stands 5’8” with a 71” reach. This is a very exciting battle between two very high level athletes!

How do you see this exciting lightweight contest going?

By Mike Pendleton 49 mins ago