June 3 at the Tropicana Showroom in Atlantic City, NJ

With three title fights on the card, Lou Neglia once again brings the top talent in the PA, NJ, NY area to battle for supremacy.  It’s staggering how many fighters have gone on from the Ring of Combat (ROC) to fight in the UFC.  This card figures to add to the total of more than 100 fighters who have made it to the big show

Let’s take a look at the Ring of Combat 55 fight card.

Michael Elshamy earned his shot with an impressive victory against Tommy Dibernardo. This will be a rematch as Elshamy was cut and had the doctor stop the bout against Eric Roncoroni at ROC 53.  Roncoroni is one of the most talented 185 lb fighters you will find. He is a product of Team Chamber MMA.  All four of his wins are by stoppage. Eric would like this trend to continue as he has his sights set on the belt. This will be a stand up battle and a very exciting fight!  The middleweight title was vacated when Oluwale Bamgbose signed with the UFC.

Frankie Buenafuente is a hot fighter right now, coming in with three consecutive impressive victories.  He has transitioned from just a wrestler into a very well-rounded mixed martial artist.  Frankie’s last bout, at ROC 54, saw his boxing and overall striking game at a new level as he has found comfort on his feet as well as on the ground.  At the top of his game, he takes on Mariscal who has a very lengthy, successful resume.  ‘Chepe’ has competed across the U.S. and the world.  He is taking this fight for the first time at 145lbs.  Mariscal ran into a freight train (Gregor Gillespie) in his last fight which was at 155 lbs. It will be interesting to see how the weight cut affects him and how he deals with the deadly double-leg takedowns from the seasoned wrestler, Buenafuente. Lots of talent in the cage for this fight.

LISTEN TO MY INTERVIEW WITH FRANKIE BUENAFUENTE BELOW

Gregor Gillespie brings with him, probably the most decorated history in NCAA wrestling of any fighter.  A four-time All-American and National champion, Gregor has not been challenged yet.  In six fights, he has six, first round stoppages.  Not since I saw Jon Jones demolishing fighters in Atlantic City’s Boardwalk Hall for Battlecage X-Treme,  have I witnessed someone so dominant in the cage at any weight class in a local (NJ-PA-NY) promotion.  No one has been able to stop Gillespie from taking them down, passing their guard, and either giving up the back or pounded into the cage floor by some of the most vicious ground and pound I have seen.  I believe he should already be in the UFC and also doing very well.  Up to the challenge is a well-respected and very well-schooled Sidney “the Gun” Outlaw. Sidney has loads of talent and heart.  He trains with some of the best instructors in the world including, Tom DeBlass, Ricardo Almeida, and Dante Rivera.  This is the biggest fight of his career and a chance to put his name on the short list of fighters waiting on a call to the big dance. He will have to find a way to keep this fight on his feet or perhaps suffer the same fate as the previous 6 opponents of Gillespie. Sidney is a humble, hard worker who is easy to like and root for.  His task is a monumental one.  This fight should be very interesting if he can keep Gillespie off the mat. 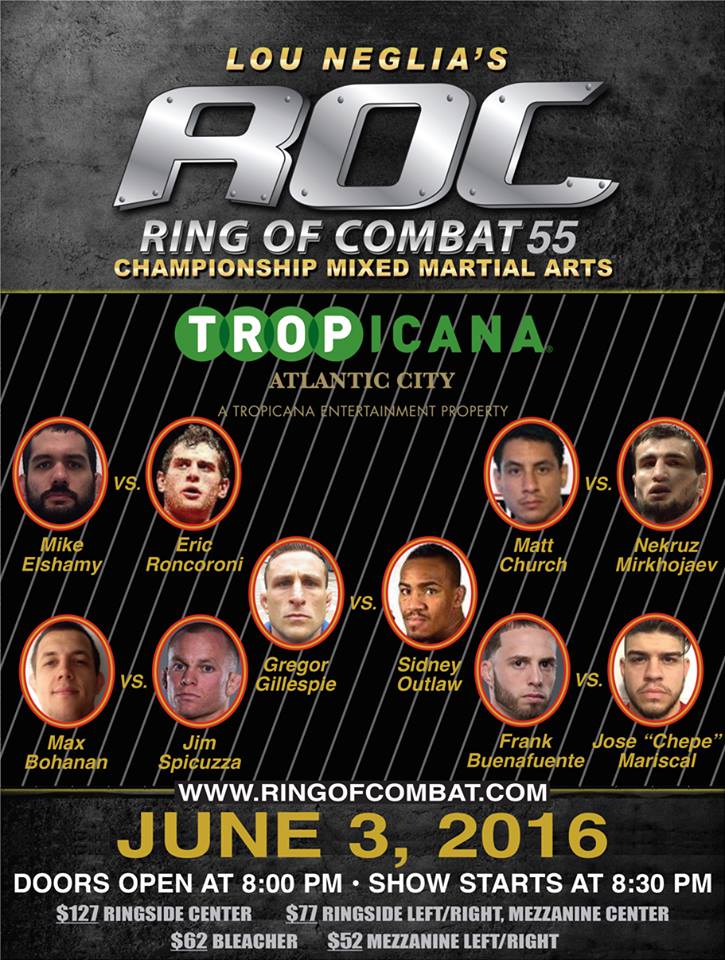 By Brian Jensen 3 hours ago