World Cagefighting Championships founder Doug Yasinsky is looking to make an impact on the sport of mixed martial arts inside the Keystone state of Pennsylvania.

The former professional wrestler turned fight promoter promises that his next card, WCC 17, will be the largest non-UFC mixed martial arts event held in the state since the sport was officially sanctioned.

That is a bold statement coming from the WCC President considering both Bellator MMA and the World Series of Fighting have held cards in Pennsylvania.

So, how will WCC 17 be the BIGGEST non-UFC event in Pennsylvania state history?

Nothing presents a better experience for fans than a stadium show in toward the end of the summer.  Insert some of the tri-state areas best mixed martial artists to create an all-star fight card lineup and you have a winning recipe.

The event will be broadcast on national television for fans who cannot make it out to the stadium.  Throughout the summer, commercials will be displayed on the stadium jumbo-tron and those in attendance will also get to relive all the replays and broadcast action.  No matter where you are at in the stadium, you will feel as if you are actually inside the cage with the fighters.

Did I mention 22 private suites and a VIP section with a private bar and box seats? 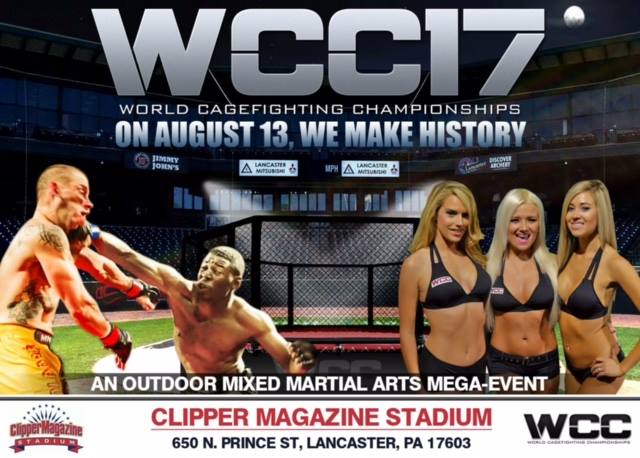 We have asked Yasinsky to give us a sneak peak as the lineup he has tucked up under his sleeve.  While “Doug Flex” as he used to called back in his wrestling days, wouldn’t yet reveal many of his secrets he did let us in on a fight that has already been signed.

One of the big fights already signed: Travis Creamer and Sharif Jones will re-do their main event matchup from March 5’s WCC 16 card.  In that bout, Jones controlled Creamer for the better part of the first round.  In the final seconds of that opening round, Creamer was able to capitalize on a situation, get Jones on the canvas, and land a few blows before the referee called an end to the contest.

The stoppage was protested by Jones and his corner, and the bad blood that the two combatants had going into the fight has now spilled over into months following, and will lead to fireworks come August 13.

At the end of the first contest Creamer gave credit to his opponent, calling him a “tough dude,” and even said that he would be happy to offer a rematch to Jones.  Can Travis “Nothing 2 Something” Creamer keep the win-streak going?

Keep your calendar open for Saturday, August 13.  Got a wedding?  Tell them, you’ll send them a card.  Baby shower?  You’ll see the kid another day.  Family vacation?  Reschedule.

WCC 17 is the blockbuster mixed martial arts event to be held inside the state, this summer.  Don’t miss it.