UFC women’s bantamweight champion Ronda Rousey is at it again.  This time the undefeated fighter and baddest woman on the planet will star in a remake of the hit 1989 film, ‘Road House’. 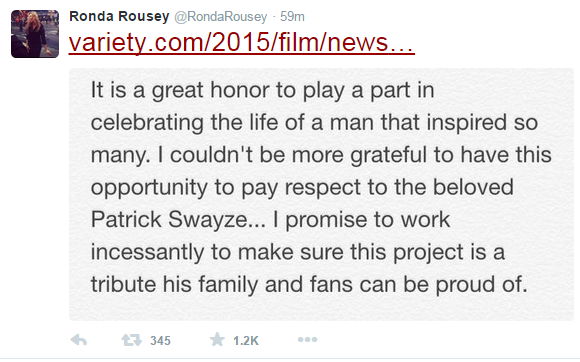 Rousey will step into the role Patrick Swayze made famous.

MGM is currently meeting with screenwriters, with production set to begin in 2016.

Released in 1989, the original film starred Swayze as a bouncer hired to clean up one of the rowdiest, loudest bars in Missouri, The Double Deuce. A gentleman with a degree in philosophy, Swayze’s character’s calm is put to the test when he needs to protect the town from a corrupt businessman.

Rousey has already had a busy year at the cinema, appearing in “Furious 7” and the “Entourage” movie after a cameo in last year’s “The Expendables 3.”

She is set to defend her title against Holly Holm on November 14 in Australia.

By Brady Briggs 16 mins ago