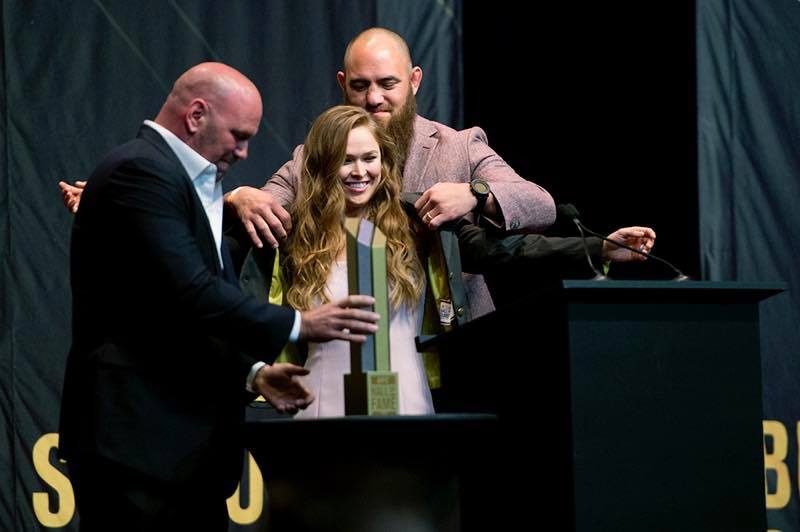 The Ultimate Fighting Championship held it’s annual UFC Hall of Fame Induction Ceremony last night in Las Vegas, part of the International Fight Week festivities.  History was made during the event as former UFC women’s bantamweight champion Ronda Rousey became the first woman to be inducted into the Hall.  Rousey landed a spot in the “Modern Wing” of the Hall.

The 31-year old former champion who has now turned to acting and a career in professional wrestling defended her UFC title six times from 2012 to 2015. She also won a bronze medal at the 2008 Summer Olympics in Beijing, becoming the first American woman to win a medal in judo.

“In my almost 18 years as UFC president, I’ve learned many valuable lessons,” UFC president Dana White said as he presented Rousey. “And the one that comes to mind tonight is never say never, especially when you’re talking to UFC. In my defense, when I famously said women would never fight in the UFC, I had never met Ronda Rousey. I had never met the woman who would change everything. She started by changing my mind and she ended up changing the world.”

Fomer UFC weltweright champion Matt Serra was inducted into the UFC Hall of Fame as the 15th member of its Pioneer Wing. UFC co-founder Art Davie earned a spot in the Contributor Wing, and the UFC 139 bout between Dan Henderson and Mauricio ‘Shogun’ Rua entered into the hall in the Fight wing.

Also, the late Bruce Connal also was introduced, after pioneering and producing more than 300 UFC televised events during his 19-year tenure with the promotion.

The UFC Hall of Fame Induction Ceremony was held at the Pearl at the Palms. International Fight Week continues tonight with the Ultimate Fighter Season 27 Finale, followed by UFC 226 tomorrow.

I had so many more to thank than I could have used the time I had the stage for. Everyone I know personally, I can thank in person … last night was for YOU. Thank YOU for watching and letting the adventures of this Venetian judoka with a bad reputation change the world🙏🏼❤️

561.3k Likes, 6,423 Comments – @rondarousey on Instagram: “I had so many more to thank than I could have used the time I had the stage for. Everyone I know…”