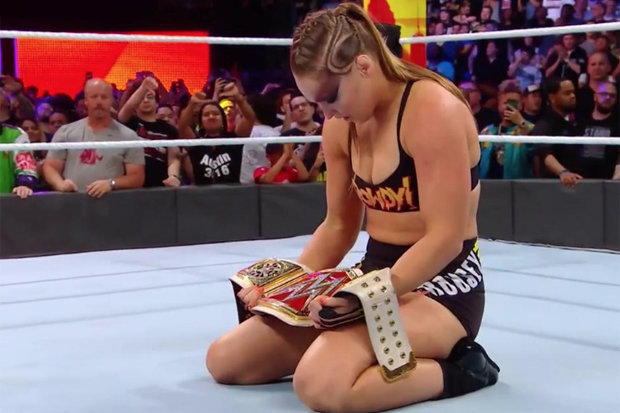 Ronda Rousey made history Sunday night as she became the first woman to have captured both UFC and WWE championship gold.  The former UFC women’s bantamweight champ defeated Alexa Bliss in the co-main event of the WWE SummerSlam pay-per-view in Brooklyn, New York, August 19 by way of submission.

Rousey began her pro wrestling career just seven months ago and has been placed mainly in tag-team matches, with last night’s title bout just the second time she has faced a competitor one-on-one on pay-per-view.

Following the victory, Rousey was joined by husband Travis Browne, and wrestlers, the Bella Twins, and Natalya.

It is expected that Rousey will be part of the WWE’s first all-women’s pay-per-view, Evolution, on October 28.

Rousey was inducted into the UFC Hall of Fame on July 6.

Another former UFC champion, Brock Lesnar headlined the WWE event, but would end up losing his WWE Universal title to Roman Reigns. This was Reigns’s third championship match against Lesnar this year.

By Bjorn Morfin 23 mins ago

By Bjorn Morfin 57 mins ago