Rose Namajunas and Pat Barry to hold seminar in Stroudsburg

Two of the world’s best fighters are coming to the north east. Pat Barry, a kickboxing and mixed martial arts legend, a 12-fight Veteran of the UFC octagon who has been in some of the most memorable heavyweight bouts in the organization’s history will travel to Stroudsburg, Pennsylvania, along with UFC strawweight, Rose Namajunas.

The duo is coming to the newly opened mixed martial arts academy of the organization’s number one ranked fighter in the same division, Claudia Gadelha.

The number three ranked UFC women’s strawweight competitor, Namajunas, and longtime Veteran of the UFC himself, Pat “HD” Barry, will be in Stroudsburg on Saturday, June 4. 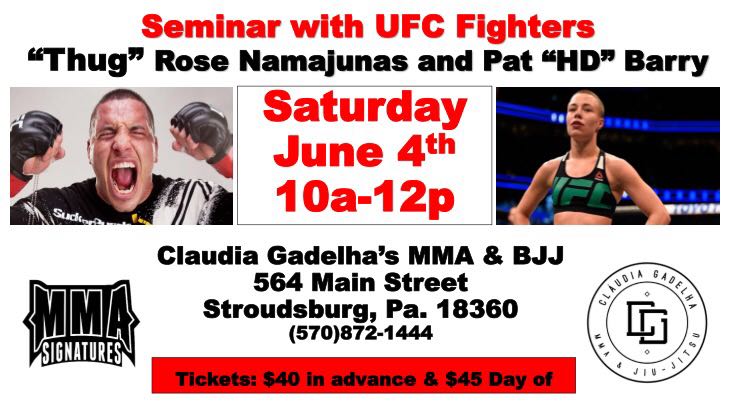 Namajunas, the Ultimate Fighter season 20 finalist and runner-up is on a three-fight win-streak since her loss to former champion Carla Esparza.  She holds wins over now Invicta FC strawweight champion Angela Hill, Paige VanZant, and most recently Tecia Torres.