Titan FC 39 Will Feature A Lightweight Title Bout Between Pat Healy and Gesias “JZ” Cavalcante on June 10 from the Bank United Center in Coral Gables, FL. The Event Will Stream Live and Exclusively on UFC Fight Pass 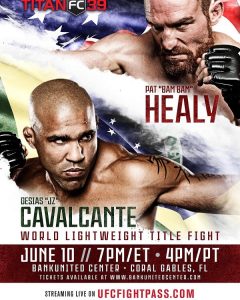 The announcement was officially made nearly 10 days ago during the Titan FC 38 broadcast on UFC Fight Pass, but that did not stop Titan FC CEO Jeff Aronson from revealing the information, March 30, while talking on the SFLC Podcast.

Featherweight champion Andre Harrison will attempt to defend his title for third time against Deivison Ribeiro in the co-main event. In a battle to determine the number one welterweight contender, Dhiego Lima will face David Michaud. Kurt Holobaugh will face Luciano Dos Santos in a lightweight match-up and Preston Parsons will take on Ignacio Bahamondes.

“Titan FC continues to put on action packed events and we are extremely excited to showcase an amazing fight card at the Bank United Center headlined by JZ Cavalcante and Pat Healy for the Titan FC lightweight championship,” said Titan FC COO Lex McMahon. “We’ve stacked the deck with a host of competitive match-ups. This is a card that you don’t want to miss, whether live in the arena or at home on UFC Fight Pass.”

For information on how to purchase tickets for Titan FC 39 please visit The Bank United Center box office by clicking here. Fans can also watch the event live and exclusively on UFC Fight Pass.