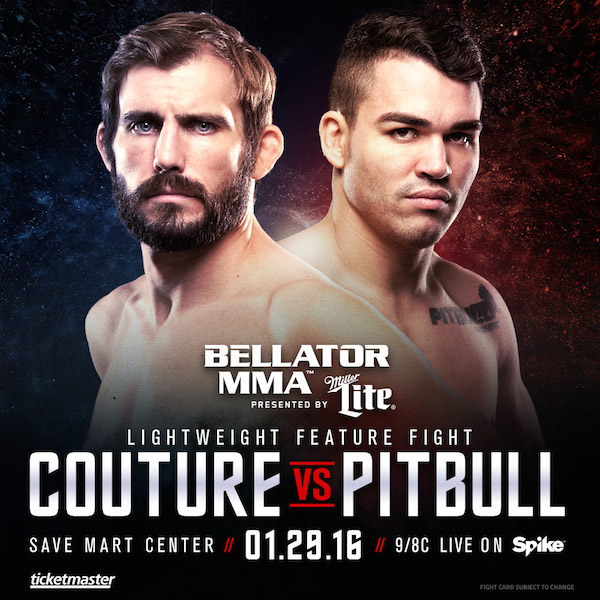 In addition, the preliminary portion of the card has been completed, with the news that Matt Perez (1-1) will meet Eugene Cancino, Nick Bustamante (3-0) takes on Salvador Becerra (4-2), Jermaine McDermott (1-0) fights Eric Huggins (1-0) and John Paul Elias (3-0) will also be in action.

“Bellator 148: Daley vs. Uhrich” airs live and free on Spike at 9 p.m. ET/8 p.m. CT, while preliminary bouts will stream live on Bellator.com and The Bellator Mobile App at 5 p.m. PT. Tickets for the event start at only $25 and are on sale now at the Save Mart Center Box Office, as well as Ticketmaster.com and Bellator.com.

Currently engrossed in a four-fight winning streak, including his first two contests with Bellator MMA, Couture will look to start off 2016 on the right foot. The son of MMA legend Randy Couture, the former Strikeforce competitor has finished all of the aforementioned wins via rear-naked choke submission. Couture was slated to compete at “Bellator 143: Warren vs. Davis,” but his opponent missed weight by more than 16 pounds.

Standing opposite of Couture will be the elder “Pitbull” brother, who agreed to the fight on short notice after Derek Anderson was forced to withdraw due to injury. Freire competed during the last event of 2015 and will now make his 14th appearance for Bellator MMA during the first event of 2016. It’s worth noting that 10 of Freire’s wins have come before reaching the judges’ scorecards.