Art of War Cage Fighting promoter Mike Bickings will hold his seventh fight card since launching the organization in early 2017 when he presents AOW7 on May 18, 2018.  Philadelphia’s 2300 Arena will play host to the event headlined by the return of “Sammy O” Sam Oropeza.

Sammy O made his professional boxing debut in spectacular fashion with a knockout win over Joe Parkison a year ago this month.  Oropeza has not competed in MMA since October 2015. He enters the cage with a pro record of 12-3.

A grudge match of Sharif Jones vs Nate Vantassel has been added to the AOW7 fight card.  The history runs deep between the two men as they were separated after an altercation ensued during weigh-ins for another event years back.  Jones was weighing in for a fight against Travis Creamer, when the argument took place. 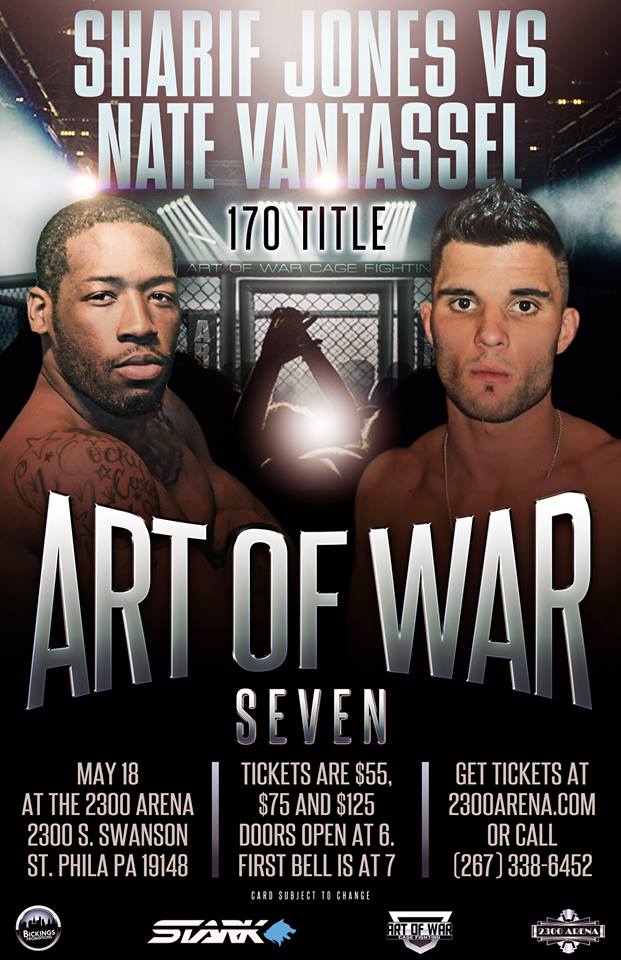 ‘Bam Bam’ Jones briefly walked away from the sport after a loss to Will Martinez in June 2017 in a fight that headlined AOW2.  The fight was built up to be one of the biggest grudge matches in the region at the time.  He returned four and a half months later to fight Gary Bellto Jr. for CES MMA.

MyMMANews caught up with Jones to discuss getting back into the cage and hoping to avoid a third consecutive loss.

“I’ve been training since the Gary Bellto fight, especially on my strength and endurance which I believed played the factor of me losing,” Jones said.

“Nathan, I believe will be a test of my stand up game. After my last fight I proved I’m not just all ground and pound, that my boxing camps are legit. I heard he has a strong right hand. Well shit, I have a strong jab, strong right hand, strong left uppercut. Shit, both my hands are lethal, so the way I look at it somebody not walking out the cage the same way they walked in it. I respect him as a fighter and he came to win, but unfortunately this is in front of my hometown crowd, going for my second belt. He’s gonna have to take this loss on the chin.

“In memory of my cousin that recently passed. Quis I put on for you always and forever. Peace In Paradise.”

The fight with will be for the organization’s welterweight title.

Vantassel brings a 4-3 pro record to the Art of War cage and will be competing for the first time since his PA Cage Fight 23 knockout win of Jim Jordan in March 2016.

Also on the card, Joe “Body Bagz” Pyfer will make his professional mixed martial arts debut. Pyfer went 4-1 as an amateur, most recently knocking out Sheldon Neighoff at AOW 5 in February.  He also recorded one of the most memorable knockouts in the regional amateur circuit when he put Adam Atiyeh to sleep at AOW4 in December 2017.