Sinéad “KO” Kavanagh (7-5) is predicting fireworks when she steps into the cage with friend and former sparring partner Leah “The Curse” McCourt (6-1) at Bellator 275 next month. For years, many in the Irish MMA scene have wondered if the two compatriots were on a collision course, and on Friday 25th February the #4 and#5 ranked featherweights will finally face off on Irish soil inside Dublin’s 3Arena. 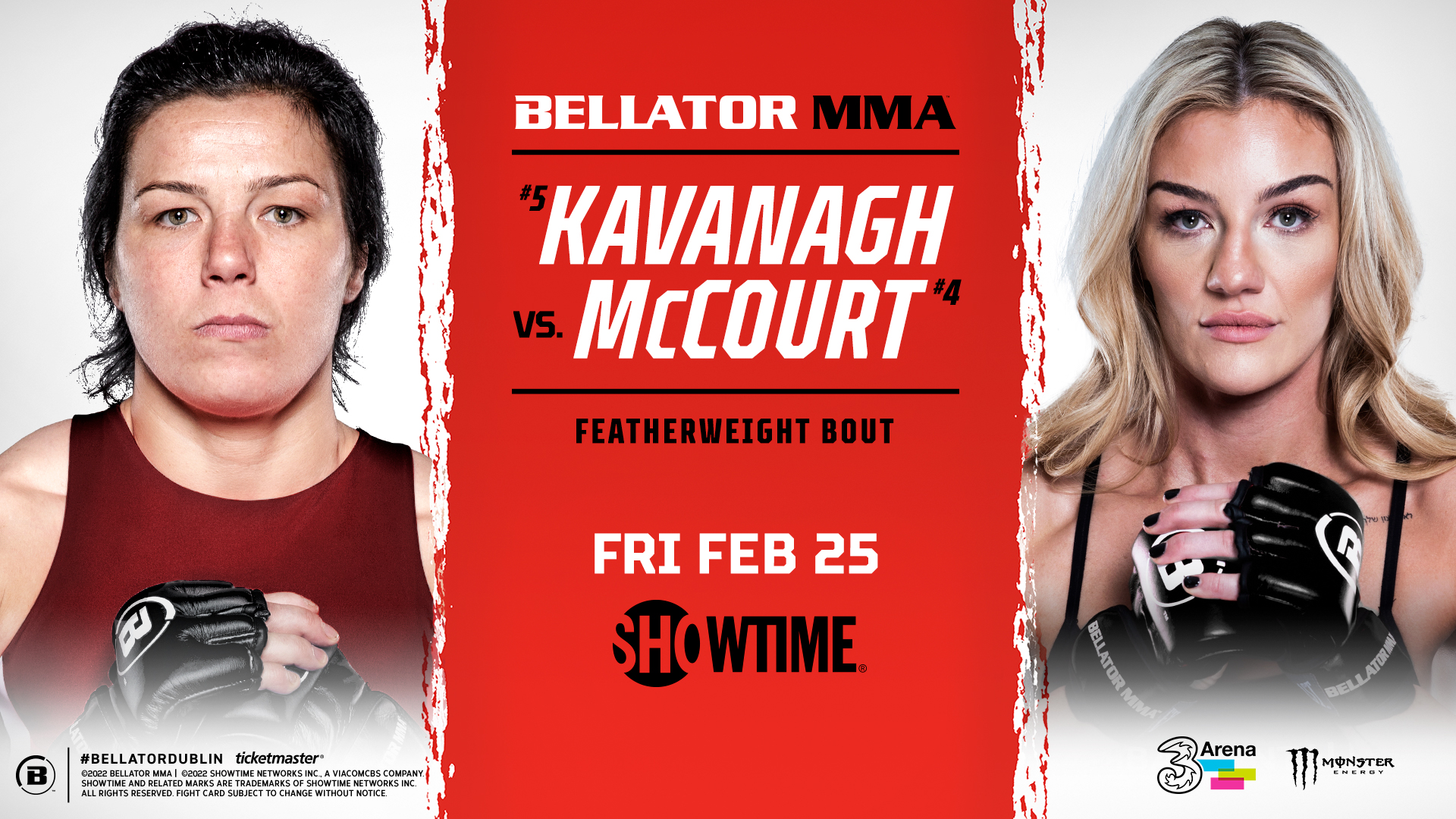 While MMA is very much an individual sport and both women are forging separate journeys in the chase of greatness, fighting someone you know is a somewhat unique and difficult situation. Speaking to MyMMANews.com, Kavanagh explained the “mixed emotions” she felt in accepting the matchup vs Leah McCourt:

“It was mixed emotions, to be honest. It was a redemption fight for my last fight, but it’s against someone I know, so that was the hard part” Kavanagh explained.

Coming off a 1st-round KO at the hands of champion Cris Cyborg, Kavanagh was eager to get back to work and right the wrongs of her previous fight. When she contacted the Bellator brass to inquire about fighting on the upcoming Dublin card, she was faced with a dilemma.

“I asked can I be on the Bellator card, and they said I can be but it’s against Leah. So, that was it. The contract came and it was Leah’s name on it. It was either sign it or not fight, so I have to fight.” Kavanagh told MyMMANews.

A decorated amateur boxer, Kavanagh is well used to facing fellow Irish boxers during her rise in that sport, but less so in her MMA career.

“I want the fight, but it’s against Leah. I don’t know, it’s a bit shitty. It’s just mad, it’s crazy. It just needs to be done though, you know. We’ll hug and kiss afterwards! I would be used to that in the boxing situation where we [Irish boxer] fought each other. Yo have to fight each other to be the best in Ireland. It’s just something you have to do!”

“You just have to put friendships aside and just do it. It’s an entertaining fight, why not. We’re both talented women in Ireland, top 5 in the world. It’s the next step up. The only shitty thing is there’s going to be a loser. And no one’s guaranteed this win between the two of us. Whoever is better on that night, whoever does it, is going to get their hand raised.” 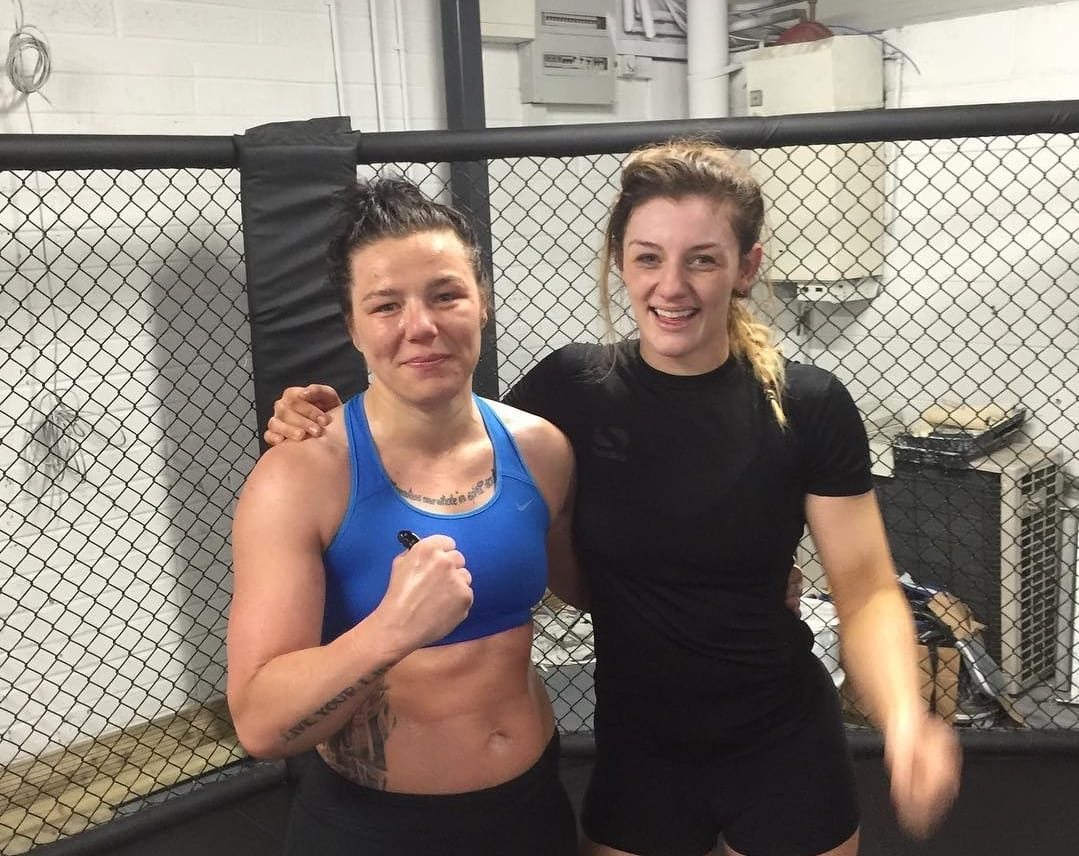 While there may be talks of this fight settling who the best women’s featherweight in Ireland is, for Kavanagh it’s all about moving back towards title contention again. Similarly for McCourt, a win over a former title contender would cement her position as one of the top contenders in a division governed by one of the greatest MMA fighters of all time, Cris Cyborg.

“To be honest, I just want to get back to that title. And she’s [McCourt] the name that’s after been given to me. Same with her. I’m the name she’s been given. We’re just going to have to do it to get to the next step.” Kavanagh elaborated.

With two ranked Irish fighters set to exchange blows, there will be much discussion over whether or not McCourt vs Kavanagh will be the biggest domestic fight in Irish MMA history. For both Leah McCourt and Sinéad Kavanagh, there is no doubt in their minds that it is.

“I definitely think so, it is. Two females. Irish. Top 5. Talented. Dangerous in their own right, and so much on the line for this fight. Yeah, I really do think so. There’s no-one going to leave their seat for this fight, for sure.” Kavanagh told MyMMANews.

Going into the contest, many fans and media alike will be wishing they could have been a fly in the wall of the SBG Ireland and Team Torres fighters’ spars, we asked Kavanagh to peel back the curtain on her recollection of them.

“It’s been a while now. I don’t know when’s the last one we had. It was just back and forth. She has her thing, I have my thing. As I said, we’re both dangerous, because we know what we bring. She’s good at what she does, I’m good at what I do. It’s two different sports within one sport. Boxing vs Judo/BJJ.” Kavanagh recalled.

When asked if she felt confident in the knowledge of their previous spars, Kavanagh gave a cautious answer, explaining that she cannot go into this contest assuming victory against a dangerous opponent like McCourt:

“You have to be confident. That’s what you have to do in the fight game. I am, but I know what she can do. She’s dangerous. I can’t be too overconfident, because that will just get you hurt.”

As for what the fans can expect when the cage door closes? Kavanagh used the exact same word as McCourt when interviewed by MyMMANews.com:

“Fireworks, isn’t it! It’s just nitty gritty. We’re just gonna get down to it, and that’s it. We’re gonna try hurt each other. That’s all there is. Case closed!”

While Irish fans may have split loyalties for this fight, Leah McCourt vs Sinéad Kavanagh marks one of the most high-profile fights in Irish domestic history. One would be forgiven for forgetting that it is but one of many mouthwatering matchups on the Bellator 275 card, which sees Gegard Mousasi defend his middleweight title in the main event vs undefeated rising star Austin Vanderford. Meanwhile, Peter Queally looks to rebound from his lightweight title defeat when he takes on Kane Mousah in the co-main event. All the action goes down on Friday 25th February, and the full card (as it stands) can be found below: