When Eugene Aubry was in middle-school, his father, Gene, wanted to put his son to the test, so he had him enroll in wrestling.  That began “the Suitcase Kid’s” journey to where we are today with Eugene about to enter the cage for Mike Bicking’s Art of War Cage Fighting 4, December 8 in South Philadelphia’s 2300 Arena. 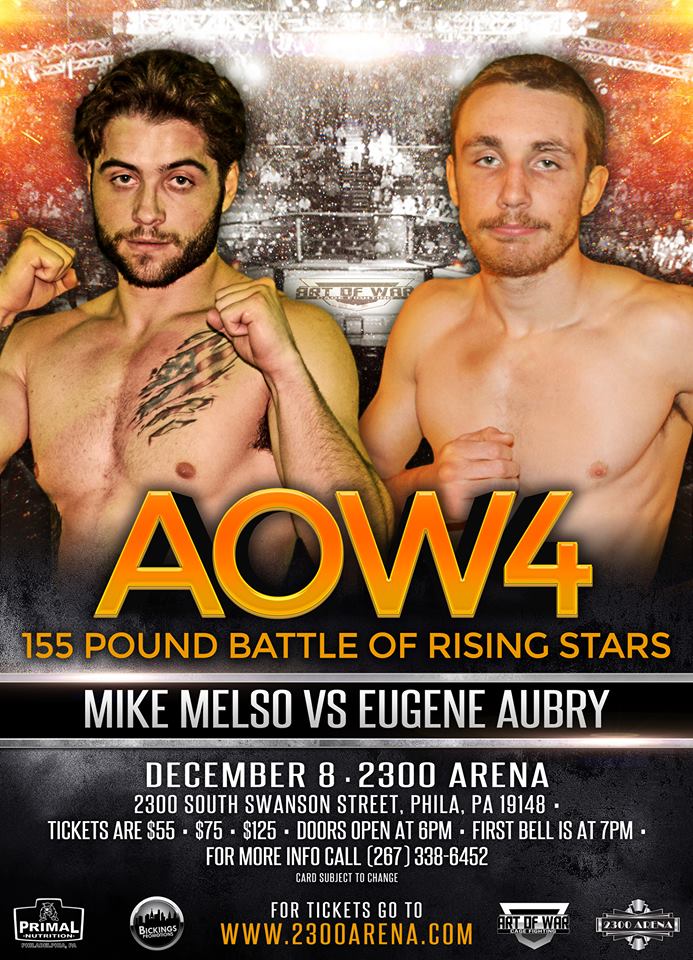 Aubry has won his last two fights by first round knockout to get to record to 3-3.  He has embraced the grind since his school days. Following him on social media, you can always catch him working out hard and often; sometimes at 4 a.m. Aubry values the rich tradition of the Philly fight game.  He visits boxing gyms, as well as practicing with some of the best trainers in the area.

Balance Studios has been where he works his BJJ with the monsters like Ricardo Migliarese and Bassil Hafez. Then Aubry strolls over to his head coach Aaron Meisner at Royal Striking.

Meisner is one of the most respected striking coaches around and Eugene is very confident that Aaron will help him get to the professional level . Aubry has also been mixing it up with rising pro prospect and astute trainer Ryan Cafaro.  Eugene has put much work in and surrounded himself with some heavy-duty talent.  His dad still grapples to this day and is a purple belt.  Competition seems to be in his blood.

The next challenge for Aubry (22 yrs old) is Mike Melso (2-2). Aubry says that Melso (22 yrs old) is tough, comes to fight has a big right hand but says ” the biggest factor in this fight is the experience. I’ve been training and in this since I was 18, and he has only been fighting for a little over a year.  I’ve got  rounds in with Frankie Edgar, Paul Felder. I’ve got rounds in with all of these top level guys and that’s going to be the difference. I’m on the cusp of becoming a pro, where I feel he’s just getting his feet wet.”

Art of War 4 goes down next Friday December 8th.  Aubry gave me a few minutes to talk about his battle with Melso, how he earned the nickname “the Suitcase Kid”, and his training leading up to the fight.  Please listen in below.  MyMMANews will be cage-side for commentary and up to the minute results as Adam Christ joins me to bring you the best coverage possible.