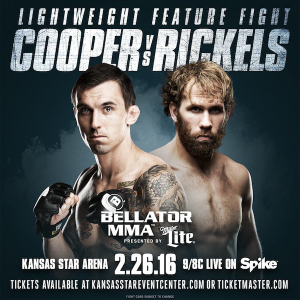 In addition, Bellator MMA’s Bantamweight Championship will be on the line in a rematch pitting Marcos “Loro” Galvao (17-6-1) against former champion Eduardo “Dudu” Dantas (17-4) and heavyweight Cheick Kongo (23-10-2) will face Augusto Sakai (9-0).

The contests will take up three slots of the televised portion of “Bellator 150: Galvao vs. Dantas,” which airs live on Spike at 9 p.m. ET/8 p.m. CT, while preliminary bouts will stream live on Bellator.com and The Bellator Mobile App. Additional fights will be announced shortly.

A Bellator MMA event in Mulvane, Kansas just wouldn’t be the same without “The Caveman,” who will return to action for the first time since competing against Michael Chandler this past November. Rickels always comes ready to put on a show, whether it’s on his way to the cage, or when he’s taking on a who’s who of Bellator MMA lightweight talent. The 27-year-old will be making his 16th appearance under the promotional banner.

The last time Bobby Cooper fought inside the Kansas Star Arena, he took home a closely contested split decision victory over “Bellator 147” co-headliner Pablo Villaseca. Now, “Super Duper” will look to move to 3-0 under the Bellator MMA banner when he faces Rickels in hostile territory. It’s worth noting that the Missouri native has only lost twice in his last eight MMA appearances.