“The Wolverine” Ethan Goss Aims For Gold At WCC 17

World Cagefighting Championship has put together some memorable mixed martial arts events in the Keystone State of Pennsylvania since their debut back at 2009.

On August 13, 2016, the organization is looking to make their 17th event a historical moment by holding the event outdoors, and it is being billed as the biggest MMA event (outside of the UFC) to be held in the state at the Clipper Magazine Stadium in Lancaster.

One of the featured bouts will be for the featherweight championship between Jordan Morales (5-2) and Ethan “The Wolverine” Goss (2-2). After starting off on a rocky 0-2 start in his professional MMA career, Goss “grinded” his way back to his winning ways with back-to-back wins, earning him one of the biggest opportunities in his professional mixed martial arts career to date. We had an opportunity to catch up with “The Wolverine” to discuss his upcoming August 13 fight. 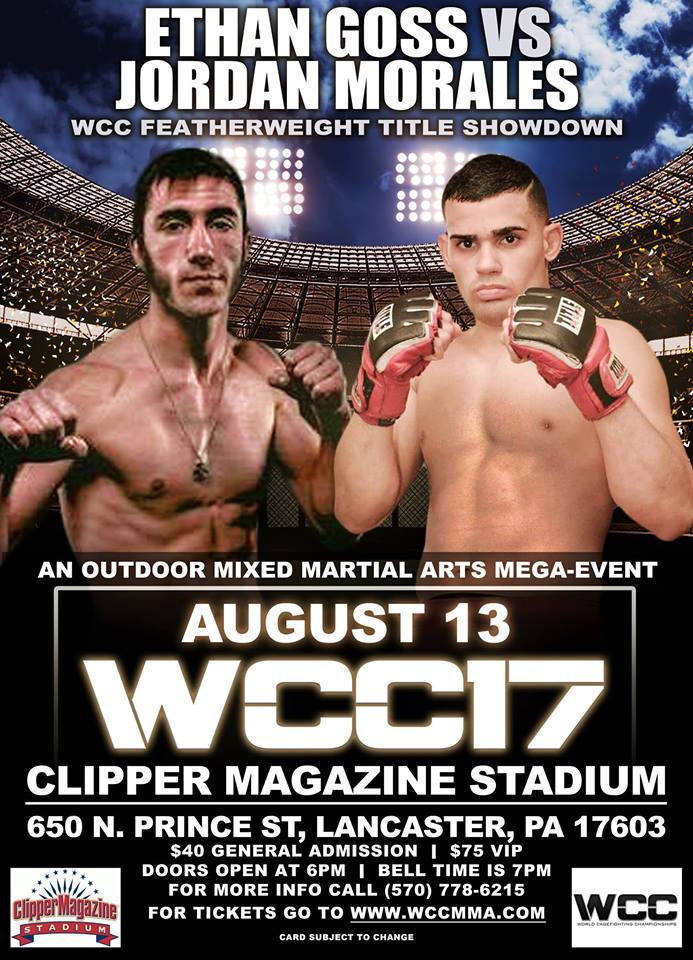 My MMA News: Ethan, how is your training camp going? How are you feeling?

Ethan Goss: “Everything is going great so far. We are really pushing the pace. I have a great coaching staff and training partners preparing me for this big fight. We have more guys coming in to help me prepare for this fight as well. I am feeling very good.”

My MMA News: You have not fought for WCC since June 2013 when you fought as an amateur and the card was held in Greensburg, Pennsylvania. You had a successful fight that night submitting your opponent.  How does it feel to be getting back into the cage in one of the biggest and brightest mixed martial arts organizations in the state?

Goss: “It feels great. I am a  huge fan of the WCC and what Doug Yasinsky has done with it. I am a huge fan of his (Yasinsky) and what he has done with the WCC. It is one of the greatest organizations that I have ever worked for thanks to Doug’s hard work. I am very excited to return there as I had one of my best performances there.”

My MMA News: This show is going to be an outdoor stadium show.  It is being billed as the biggest mixed martial arts events to ever be held in the state, outside of the UFC.  How does it feel to be part of such a historic event?

Goss: “It definitely is awesome and this is going to be a big event. I contacted Doug a while back and he gave me a chance by adding me to an event this big. This will be a new experience for me as it will be my first time fighting outdoors and I am very excited. It is going to be a great atmosphere with lots of energy, and I am looking forward to it.”

My MMA News: You are not only fighting on the big stage, but also for a title.  You are challenging Jordan Morales for the WCC featherweight title.  What do you know about your opponent and how do you see this fight going down?

Goss: “He (Morales) is a tough kid. I always heard his name through the amateur ranks when I was fighting in the amateur level. I know that he comes from a very good gym out of Sunburry (Pennsylvania) where guys like Tim Boetsch (UFC) train at. (Morales) is a tough kid, no doubt about that, with a great team. That said I know what needs to be done and I am excited about this fight and confident in my abilities.”

My MMA News: You lost your last two amateur fights and your first two professional bouts, losing a combined four fights in a row.  Then you turned things around and won your next two professional fights.  Did you incorporate anything different into your game plan, or can you attribute those losses to anything in particular that you are now doing differently?

Goss: “As an amateur, I wasn’t looking for an undefeated record. I always went for best of the best and the toughest guys in ranks to gain experience and ready myself for the professional rankings. I was fighting for experience, and was not worried about trying to pad my record. I always want to fight the best to challenge myself. 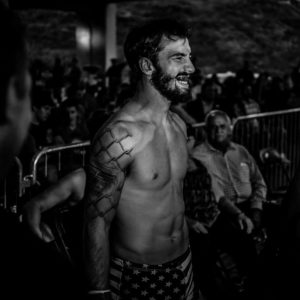 In my pro debut, I went down a weight class at bantamweight (135). The cut was decent, unfortunately I didn’t have legitimate coaching at the time. I had great training partners but I didn’t have the type of coaching where I could be constantly watched and helped out with making any adjustments. My second fight was also scheduled to be at bantamweight, but I took it on two week’s notice and couldn’t cut to 135, so we agreed on a catch weight at 140.

I ended up switching coaches and am currently coached by Jason Digman. He has done an awesome job and I can’t thank him enough for all that he is doing. He is a great coach and I cant thank the staff and training partners enough for my recent success.

I felt good at 135 but it was a struggle at that weight class with the weight cutting being tough. Physically, I feel more comfortable and stronger at featherweight (145).  I feel much better at 145.”

My MMA News: Your opponent, Jordan Morales is coming off a loss.  He has a 5-2 professional record, and he is also a World Cagefighting Championships Veteran.  His first pro fight was with WCC.  If you win this fight, you are going to become sort of a brand ambassador for the company as you will be their champion.  Are you ready for the added pressure of headlining fight cards, more media obligations, fan recognition, etc?

Goss: “Absolutely. I embrace it…this is why I am in the game and I love it. I want to be the best that I can be, and become the best in the world. I thank Doug for opportunity and putting me against a top caliber guy like Morales. Instead of giving me a greener opponent, he is giving me a great opportunity and a challenge and I am ready to rise to that occasion and fight in title contender matches and at the main event levels.”

My MMA News: Lastly, before we let you go, is there anyone you want to thank?  Any sponsors, family, friends, or any social media you want fans to follow you on?  The floor is yours.

Goss: “I want to thank my coaches and partners AJ Madden, Jason Digman, Cody (Karlheim), Brian, and many more, they’re an awesome group. I also want to thank my sponsors Curry Rail Services and Legends Warehouse and Gym, they have been a huge help for me and I am thankful for it. I want to also thank my family, my mother for the best support I could ever have.”