The Roufusport fighter plans to improve his record to 14-4 in his 145-pound title defense. Another victory for Griffin will increase his winning streak to six. He’s set to step into the cage with a former Division I Big Ten Purdue wrestler. Archuleta will clearly be the most elite grappler Griffin has faced in his career.

Juan “The Spaniard” Archuleta is bumping one weight class to fight Griffin for the King of the Cage 145-pound title. Archuleta wrestled at 141 from 2008-10 at Purdue University. While there, Archuleta posted a 43-27 career record.

The California native, Archuleta (10-1), suffered his sole loss to Andres Ponce at the World Series of Fighting 19 – Gaethje vs. Palomino. Since his loss to Ponce, Archuleta has been on a five-fight win streak and is also seeking his sixth straight victory, according to Sherdog.com fight records.

The Milwaukee native is confident in his training that he’ll be able to fight-off the takedowns by Archuleta and utilize his boxing. Griffin has been sparring and training with UFC welterweight title challenger, Tyron Woodley, One FC welterweight champion, Ben Askren, and former UFC lightweight champion, Anthony “Showtime” Pettis. All of whom are teammates at Roufusport MMA Academy.

“Just go out there and win, just go out there and finish,” Griffin said, in a mellow demeanor over the phone to My MMA News reporter Kyle Carroll when discussing what he expects from his July 23rd KOTC bout. Less than two weeks from his bout and Griffin is feeling strong, confident, and most importantly, his weight is on point. Griffin expects to weigh 146, which is KOTC’s bantamweight division. Archuleta will be climbing up a weight class from 135 to 145 to challenge Griffin for the bantamweight belt.

Griffin continues to show his dedication to the sport, as is now a full-time training athlete. He works at the Pettis gym in Milwaukee as an instructor. The 145-pounder also utilizes the advantages he has afforded him at Roufusport. He’s sought out guidance and dieting tips from teammate and UFC veteran Erik Koch.

Erik “The Phoenix” Koch took a brief two-year sabbatical from competition before returning in May 2016, at UFC Fight Night 88. It was a successful return for “The Phoenix”, as he strangled Shane Campbell via Rear Naked Choke in the second round at 3:02. Koch jumps back into the octagon at UFC 203. He’ll be fighting Drew Dober at the Quicken Loans Arena in Cleveland, Ohio.

Each of King of the Cage’s champions 5’10” tall, both with similar reach. The difference though between these two fighters five-fight win streak, is Archuleta has only finished two of his five opponents. Griffin has finished four of his five last opponents, all in the second round or better.

On paper, Griffin appears to have the advantage in the striking department. Archuleta has the grappling check next to his name, and we all will get to witness which fighter has the heart of a champion in this title bout, which will be aired on MAVTV.

Fans attending the KOTC event in Washington, PA, can expect a great fight and championship effort from both athletes. The Challenger is 10-1. The champion is 13-4. Archuleta is seeking his second title in two divisions. Griffin is defending his throne for the third time. This is a main event true MMA fans should tune into. One or both of these warriors could very well find their way into the UFC or Bellator MMA promotion with a couple more victories under their belt.

As the true gentlemen Griffin is, he always remembers to thank his support system. “I want to thank my teammates for the support they always show, helping me train for my fights, and getting me through the weight cut,” mentioned Griffin.

The Meadows Casino doors swing open at 6:00 pm and the fights are expected to begin at 7:00 pm est. Griffin and Archuleta will battle for the King of the Cage bantamweight belt in the main event of the evening in Washington, PA. 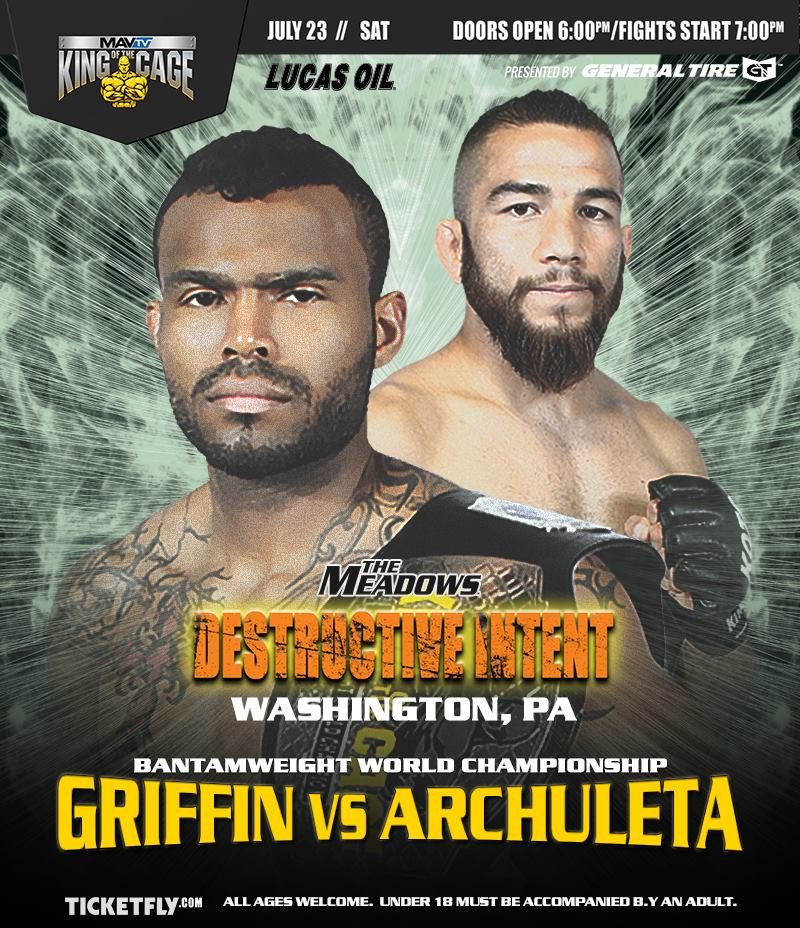