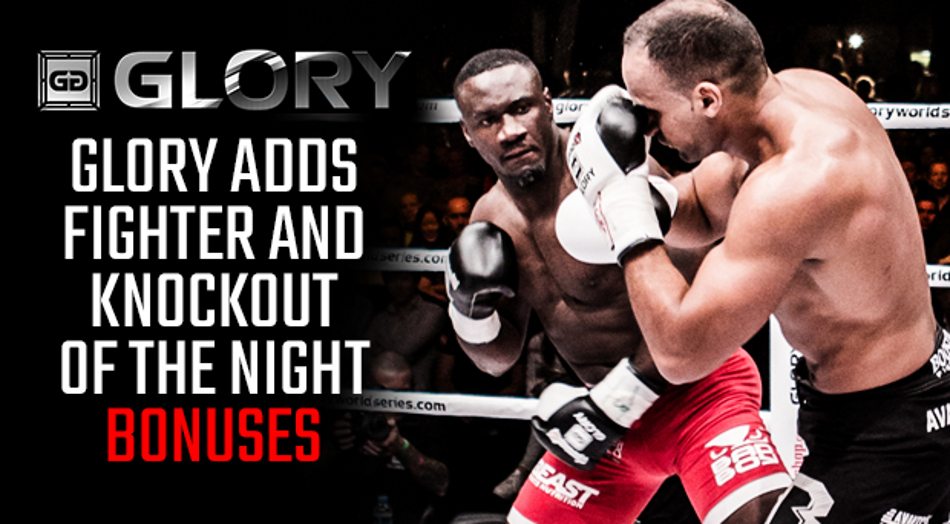 All fighters competing at the Ted Constant Convocation Center in Norfolk, Va. this Friday and all fighters at each subsequent GLORY fight night will be eligible for the ‘Fighter of the Night’ and ‘Knockout of the Night’ bonuses.

‘Fighter of the Night’ will be awarded to the competitor (on either the numbered series or SuperFight Series) that demonstrates the most impressive performance inside the GLORY ring that evening. Both winning and losing fighters will be eligible for this bonus.

‘Knockout of the Night’ will be awarded to the competitor (on either the numbered series or SuperFight Series) that delivers the most spectacular knockout during the event.

‘Fighter of the Night’ and ‘Knockout of the Night’ will be selected by GLORY Talent Operations following the conclusion of the final bout and announced during the post-fight press conference.

Winners of ‘Fighter of the Night’ and ‘Knockout of the Night’ will each receive $5,000. If a single athlete wins both awards, the result will be a combined bonus of $10,000 for that individual.

“With the highest knockout rate in combat sports, [GLORY] thought it was time to reward our incredible fighters for the level of excitement that only they can bring,” said GLORY CEO Jon Franklin. “We are even looking at implementing a system that includes a fan voting component down the line.”

GLORY 32 Virginia streams live at 10 p.m. ET on ESPN3, while also airing with a one hour delay at 11 p.m. ET on ESPN2. The card is headlined by reigning GLORY featherweight champion Serhiy Adamchuk (33-5, 14 KO) of Ukraine, defending his belt against Canadian challenger Gabriel Varga (27-3, 8 KO).

Tickets for GLORY 32 Virginia and GLORY 32 SuperFight Series are on sale now, priced at $100, $75, $45, and $25. Tickets are available for purchase via ynottix.com or by visiting the Ted Constant Convocation Center’s Box Office.