Titan FC 41 Results:  A Women’s Bantamweight Champion Will Be Crowned 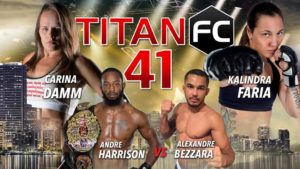 In the main event, Carina Damm and Kalindra Faria fought to determine the first Titan FC women’s bantamweight champion.  It was an absolutely dominant five round performance for the new champion Kalindra Faria.

The event will stream live and exclusively on UFC Fight Pass.

By John Eric Poli 7 mins ago