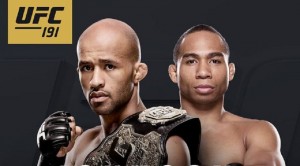 UFC 191 from the MGM Grand Garden Arena in Las Vegas, Nevada was headlined with a rematch between UFC flyweight champion Demetrious “Mighty Mouse” Johnson versus the challenger, John “the Magician” Dodson.

The two fought in the headlining fight at UFC on FOX 6 back in Janaury 2013 with Johnson winning a unanimous decision victory.

Johnson (22-2-1) is widely considered one of the best pound-for-pound fighters on the planet not having lost since 2011 against Dominick Cruz.

Dodson (17-6) had not lost since that first fight with Johnson.

In this rematch the champion would be near perfect, winning a unanimous decision and retaining the title.

In the co-main event it was a fight that was 10 years in the making as two former UFC heavyweight champions finally went toe-to-toe when Frank Mir and Andrei Arlovski met in the center of the octagon.

Also on the card light heavweights Anthony Johnson and Jimi Manuwa, and Corey Anderson and Jan Blachowicz each put on a show.

Kicking off the pay-per-view portion of the card were strawweights Alex Chambers and Paige VanZant.  It was a clinic from start to finish for Paige VanZant who submitted Chambers in the third round via armbar submission.