The UFC returns to the T-Mobile Arena in Las Vegas, Nevada on Saturday night with UFC 272. In the pay-per-view main event, former friends and teammates Colby Covington and Jorge Masvidal will look to settle their beef inside the octagon.  MyMMANews.com has your UFC 272 results below.

Even though he’s coming off of two straight losses to UFC welterweight champion Kamaru Usman, Masvidal is still of the biggest draws in the UFC. The numbers for UFC 272 are trending upward and now, the company has once again rewarded Masvidal.

“Gamebred” took to his social media on Thursday night, just two days ahead of his fight against Covington at UFC 272, to announce that he has signed a new contract with the UFC.

Covington is also coming off a loss, his second to current UFC welterweight champion Kamaru Usman.

Also on the card, former UFC lightweight champion Rafael dos Anjos will meet Renato Moicano on short notice after Rafael Fiziev tested positive for COVID earlier in the week and was forced to withdraw. Moicano steps up to the contest in a catchweight bout of 160-pounds after he defeated Alex Hernandez less than a month ago at UFC 271. 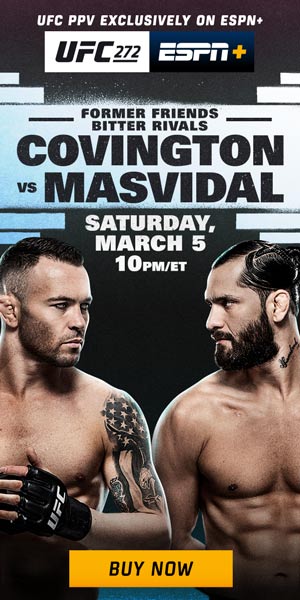 By Chinyere Okafor 23 hours ago