The Ultimate Fighting Championship returns to us this weekend, May 7, 2022, for UFC 274, going down live from the Footprint Center in Phoenix, Arizona.

This event is to showcase two title bouts, the first of which, prior to Charles Oliveira vs Justin Gaethje, is contested in the 115 lb division between UFC strawweight champion Rose Namajunas and former strawweight champion, no. 1 ranked Carla Esparza.

Namajunas came into the fight as the favorite, though she was mauled for three rounds, eventually being submitted (rear naked choke) at 1:26 of round three.

Esparza lost the title in her very next fight to Joanna Jedrzejczyk, while Namajunas began to climb the rankings immediately following.

Namajunas went 4-1 over her next five, the only defeat coming via split decision, and she was now challenging Jedrzejczyk for the title herself.

To everyone’s surprise, Namajunas finished the longtime champion off in the first round via TKO and defended via unanimous decision in their immediate rematch. She then faced Jessica Andrade, who she was looking absolutely incredible against, better than ever, until she was picked up and slammed on her head, resulting in a KO defeat.

Namajunas returned 14 months later to sign another immediate rematch, against Andrade, who was no longer champion. ‘Thug Rose’ won a three-round decision this time around, granting her a title shot at the new champion.

That new champion was Weili Zhang, the woman to defeat Andrade for the belt. She also had a title defense against Jedrzejczyk herself. That fight won Fight of the Year honors in a whopping 11 different MMA media outlets.

Nonetheless, Namajunas KO’d Zhang in round one with a beautifully timed and placed head kick. She then defended her title in yet another rematch, winning a five-round split decision this time around.

Following her title losing effort against Jedrzejczyk, Carla Esparza had a tough time finding her groove in the UFC, going 3-3 over her next six bouts. However, she’s really filled in the gaps over the last three or so years, going 5-0 since 2019.

Esparza even capped off her latest victory with a finish, something she hadn’t done since winning the championship over Namajunas in her UFC debut.

Then we have Namajunas, who won the belt against a 14-0 six-time UFC champion, and also a multi-time kickboxing world champion. She defeated her with her striking in both encounters.

After avenging her loss to Andrade, Namajunas then defeated a 21-1 champion to reclaim the title, and again defended it in the immediate rematch.

Of Namajunas’ last six fights, she fought three opponents, all three of them back-to-back.

Now she heads into yet another rematch, as she aims to make the second consecutive defense of her beloved championship this weekend at UFC 274. 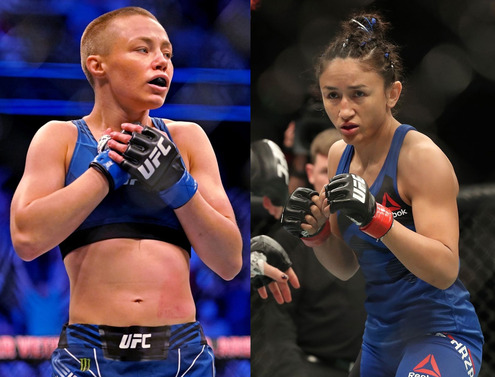 Namajunas’ advantage would lie in the striking department, where she’s a Taekwondo black belt, as well as a karate black belt. Her boxing has also become very impressive over the last four or five years.

Esparza on the other hand, of course, watching their first fight, her advantage lies on the mat, where she’s the best wrestler in the division now that Tatiana Suarez has been out of the picture for some time.

Who walks away the victor in this epic championship rematch?  Will it be Rose Namajunas or Carla Esparza?

Order and watch UFC 274 by clicking the image below

By Chinyere Okafor 24 hours ago