Nikolas Motta is mapping out the new year.

Back home in New Jersey after visiting his family in Brazil over the holidays, Motta is ready to kickstart his octagon career. After making his professional debut in 2012, Motta earned a UFC contract with a unanimous decision win over Joseph Lowry on “Dana White’s Contender Series” this past November

Although Motta was nursing a hand injury from the fight, the 27-year-old is targeting his octagon debut in late March.

“I am thinking about the end of March, so I have enough time to do a full fight camp and be 100 percent ready,” Motta said.

“I feel pretty well. When I was in Brazil, I still trained a little bit. In my fight, I just hurt my knuckle a little bit, but nothing crazy.”

With two locations to choose from to make his debut, Motta prefers Las Vegas, Nevada over Yas Island, Abu Dhabi. He is more comfortable with making the shorter flight to Las Vegas, although “Fight Island” does have its perks.

One of the advantages is the reintroduction of fans in attendance. About 2,000 spectators attended UFC on ABC 1 inside the Etihad Arena on Saturday, Jan. 16.

Motta’s victory over Lowry came inside an empty UFC Apex, making fans all the more appealing.

“I like Vegas, it is easier to go to Vegas. ‘Fight island’ is such a long flight, but I’ve been watching people on ‘Fight island’ and it looks so cool,” Motta said. “When you have fans in the crowd, it gives you more adrenaline and you do more things you don’t even know what you do.” 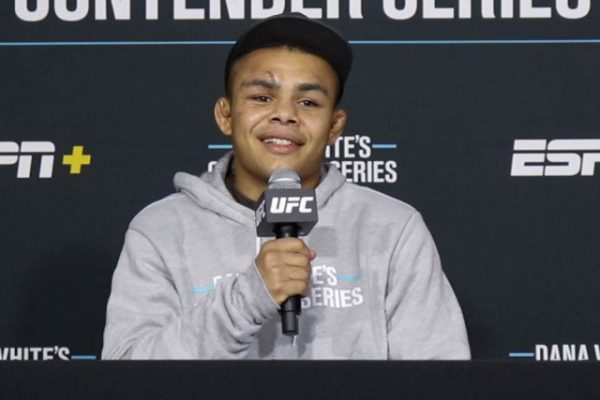 Living in New Jersey for three years, Motta recently visited New York City for the first time. He visited Times Square, the Sept. 11 Memorial and Museum and the Statue of Liberty.

Besides fighting in his home country of Brazil, competing inside the famed Madison Square Garden is also at the top of his list of places to fight. When this could happen is unknown with the COVID-19 pandemic, but Motta can still picture it.

He is close to making his UFC debut after all.

Motta said, “ I can die after that [fighting in MSG]. I could die happy after that.”

To see Nikolas Motta’s full interview with MyMMANews, click on the video above.