Valor Fighting Challenge is set to hold their 61st event on August 2, 2019, at the World Famous Cotton Eyed Joe’s in Knoxville, Tennessee. The card consists of 13 fights;  five professional and eight amateur bouts.

The main event of the evening will be David Robins taking on Adam Denton. Denton, is a tough, gritty fighter who moves a lot and loves to strike. Pair that up against the fast-paced, relentless, clean-hitting Robins and this contest is a mixed martial arts fan’s dream fight.

The co-main features a women’s featherweight fight between Olivia Parker and Jamie Driver. We caught up with VFC Matchmaker Tim Loy and he had this to say about the fight: “We are always excited to feature the females in the cage, and this fight is sure to deliver. Both of these ladies are coming in hot off wins, and are supremely confident they will get the win at Valor 61.”

The card’s featured fight of the event is the long-awaited return of Steven New, as he faces off against Tyler Smith. New is coming back off of a two-year hiatus. He looks to be in the best shape of his life and is training hard for his return.

Chase Wender is set to face Antowuan Moseley at featherweight.  Both guys have wanted to fight each other for several months now and the fans finally get to enjoy the bad blood. Bringing us to the last pro fight to talk about, yet certainly not least,Keith Olson vs. Charlie Durham finishes out the professional side of the card. The fight brings another action-packed fight to the table. Neither fighter is new to the sport and both bring a ton of experience.

This brings us to the amateur portion of the card, boasting six MMA fights and two Muay Thai fights.

The highlights of the amateur card consist of a light heavyweight fight between Steven “Tank” Wilson Jr. and Dakota Luna. The card is bringing in the heavyweights as Dale Dodd goes up against John Napier. Also we will see the return of “The Sea Goat” Anthony Cochran as he prepares For Joel Winters.

Arguably the biggest fight on this amateur side is a Muay Thai Fight featuring the promotions Lightweight MMA Champion, Joseph Long as he takes on Kentucky standout Zack Fox, this fight is contested at a catchweight of 165lbs.

Matchmaker Tim Loy was happy to tell us about this matchup: “This is the ammy fight I am most excited for! Long has proven to be one of the top prospects in the region but is coming off a loss, while in my opinion Fox is one of the very most improved fighters in the region over the last 2 years and is HUNGRY for the biggest win of his career!”

Doors open at 5:00 pm and the fights start at 6:00 pm. Valor events are family-friendly.

Tickets are on sale through the promotions venue Cotton Eyed Joe’s or you can purchase tickets directly from local athletes. 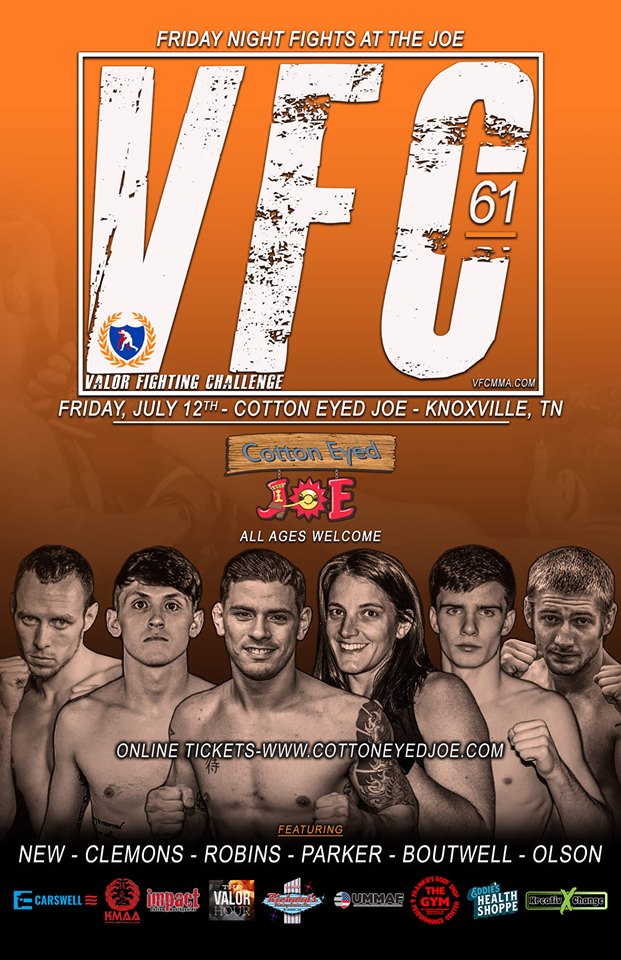