Victory Fighting Championship, in conjunction with Hoosier Fight Club, has set the main and co-main events for VFC 60 set for Saturday, April 14th at the Horseshoe Casino in Hammond, Indiana.

Topping the bill is welterweight showdown a pair of former HFC champions against each other as Andrew Kapel clashes with Kevin “Give Me Your Lunch Money” Nowaczyk. In the co-main spot, it’s a heavyweight tussle that will see rising prospect Mohammed “The Motor” Usman against the formidable Don’Tale “King Kong” Mayes.

Tickets for VFC 60 are on sale now at both Ticketmaster.com and Cagetix.com/VFC.

A 32-year-old out of Minneapolis, Minnesota, Kapel (11-6) has won four of his last five outings with three of those wins coming via first-round submission. Kapel earned the Hoosier Fight Club middleweight title in April 2016 when he registered a first-round tapout via triangle choke against Nick Kraus.

Nowacyzk is true fixture of Hoosier Fight Club having fought all but three of his 18 career pro bouts with the organization. Fighting in Hammond, Indiana, will give the 29-year-old home-field advantage as he hails from nearby Chicago. Nowaczyk is riding an eight-fight winning streak and six of his career victories have come via submission. He captured the Hoosier Fight Club welterweight title in February of last year with a second-round tapout of Daniel Vizcaya.

The younger brother of UFC standout Kamaru Usman, Mohammed Usman (3-0) has posted a trio of first-round finishes to launch his career. His most-recent victory earned him his first TKO verdict to go alongside a pair of submissions via kimura. Originally from Auchi, Nigeria, Usman moved to the United States and settled in Arlington, Texas at the age of six. A former high school wrestling star, Usman went to played NCAA football with the University of Arizona Wildcats and University of Houston Cougars.

The 6-foot-6 Mayes (3-2) is from Louisville, Kentucky, and the 26-year-old started his MMA career off with wins in three of his first four bouts, picking up two victories via submission due to strikes. Most recently, Mayes appeared on Dana White’s Tuesday Night Contender Series, dropping a third-round TKO verdict to Allen Crowder.

More bouts for the VFC 60 card will be announced shortly. 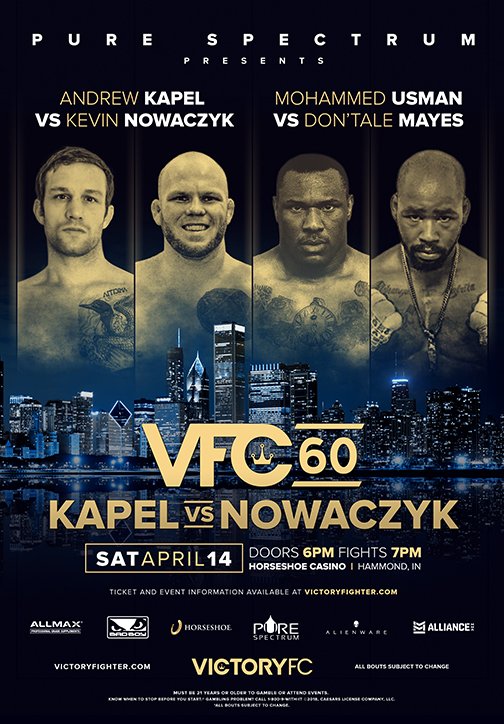 Chris Daukaus – “I get paid to get in fistfights. I wouldn’t change it for the world.”