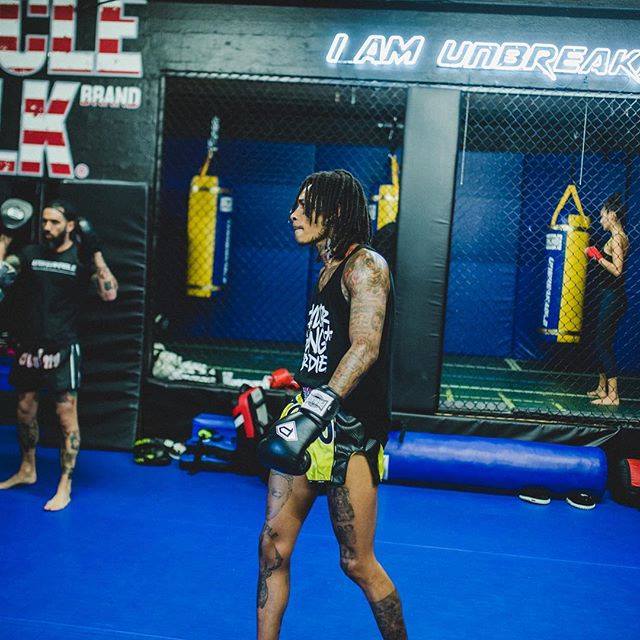 It is no secret that rapper Wiz Khalifa has an interest in MMA training and combat sports, but is it actually possible that we may see him compete in MMA one day soon?

Khalifa, who has allegedly been training for quite some time now and has even spent some time training with Muay Thai legend Saenchai, said last month in an interview with TMZ that he’d be open to having an actual MMA fight, as long as the money is right.

Following Jay Glazer’s recent statements that Khalifa has the skill to compete in professional MMA, Khalifa had this to say to TMZ last month, “I could,” he agreed. But he also said that he likes rapping better. He also added, “You got to pay me a whole bunch of money to get me to fight, man.”

Khalifa expressed more interest in competing in Bellator than the UFC, which, actually, would probably be the much better fit for someone just starting out. But, still, he just doesn’t have the necessary amateur background to compete successfully in professional MMA and UFC bantamweight Sean O’Malley says the same in this recent video with TMZ seen in the below video.

But O’Malley insists that it’s nothing personal and that Wiz just hasn’t put the necessary time in training and you have to look at it like a full-time job and not just something you do on the side for fun.

“Nothing against him, it’s just like, I’ve been training since I was 16, you know, training a lot.”

O’Malley has quickly made a name for himself in the UFC since appearing on Dana White’s Tuesday Night Contender last summer where he impressed everybody with a stunning knockout victory and earned himself a UFC contract.

The 23-year-old bantamweight is currently 3-0 in his UFC career, putting his current professional record at 10-0.

Check out his recent interview with TMZ in the video below.

Some real talk from UFC rising star Sean O’Malley … who tells TMZ Sports he’s a BIG fan of Wiz Khalifa, but knows the dude would get crushed if he took a real UFC fight.

By Mike Pendleton 55 mins ago