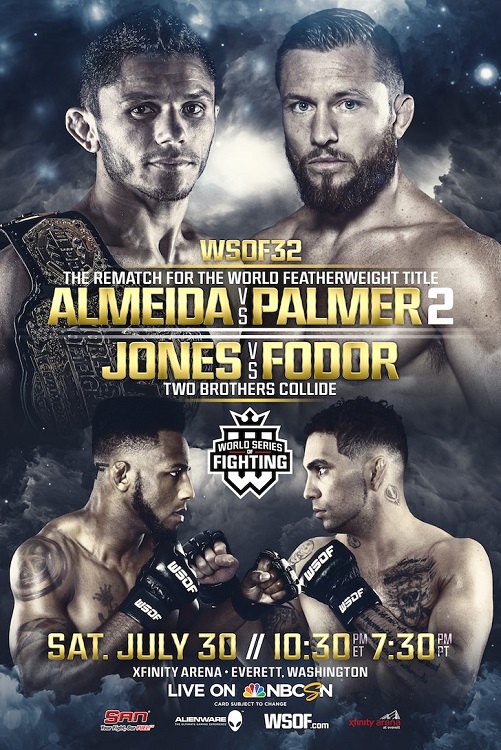 BROTHER VS BROTHER AT WSOF 32

TICKETS ON SALE FRIDAY, MAY 6

LAS VEGAS (May 3, 2016) –World Series of Fighting (WSOF.com) announced today that it will head to Washington State for the first time ever with a star-studded Mixed Martial Arts (MMA) mega-event, headlined by a world featherweight (145 pounds) championship rematch between reigning kingpin Alexandre “Capitao” Almeida (18-5) and the man he took the title from – Lance Palmer (10-2) – at XFINITY Arena at Everett on Saturday, July 30, live on NBCSN at 10:30 p.m. ET/7:30 p.m. PT.

Priced from $29, tickets for WSOF32: Almeida vs. Palmer go on sale at 10 a.m. PT on Friday, May 6, at XFINITYArenaEverett.com and WSOF.com.

In the co-main event, the long-standing and well-documented sibling rivalry between costumed crusader Phoenix Jones (6-1-1) aka Ben Fodor, and Caros “The Future” Fodor (10-5) will come to a head when the adopted brothers from Seattle face off against each other at a catchweight of 162 pounds.

“We are excited to make our debut in the great state of Washington with such a spectacular affair that will feature one of the most anticipated and well-deserved rematches of the year, as well as a something that you rarely see in combat sports – a matchup between family members whose competitive rivalry is so intense that, after so many years, it has resulted in the two agreeing to settle their differences in the cage,” said World Series of Fighting President Ray Sefo.

Additional bouts for WSOF32: Almeida vs. Palmer will be announced soon.

On December 18, the 5-foot-11, 27-year-old Almeida of Manaus, Amazonas, Brazil notched his fifth consecutive win, seizing the World Series of Fighting featherweight title from Palmer of Sacramento, Calif. via a controversial, unanimous decision after Almeida used his significant height and reach advantage to continuously frustrate the 5-foot-6, 28-year-old Palmer for the duration of their five-round matchup.

The loss snapped a three-fight win streak for Palmer, who captured the featherweight strap when he submitted Rick Glenn with a rear-naked choke in the third round (3:09) of their matchup on December 13, 2014.

Over the course of the last five years, Jones and Fodor of Seattle have each, on several occasions, gone on the record expressing their desires to fight one another, despite the fact that they grew up under the same roof and train in the same camp owned by head coach Matt Hume.

The 6-foot, 27-year-old Jones, whose local crime fighting escapades have made national headlines, will make his first start in the decagon cage since September 18 when he submitted Roberto Yong with a rarely seen, highlight reel scissor choke in the first round (3:09) of their meeting at WSOF23.

Fodor, a 5-foot-9, 32-year-old veteran of the Ultimate Fighting Championship (UFC) and Strikeforce, made his debut under the World Series of Fighting banner, after a five-fight stint with ONE in Asia, on January 23, losing a unanimous decision to Luiz Firmino in the main event of WSOF27.

During his seven-year professional career, Fodor, a former U.S. Marine who did battle in the Iraq War, has notched impressive wins over the likes of Team AKA member Justin Wilcox and Cung Le-trained James Terry.