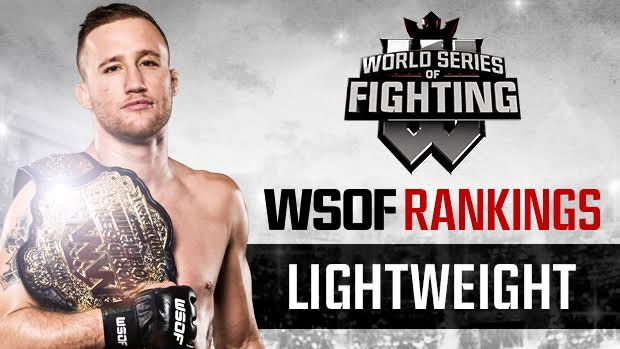 Rankings are constantly debated in MMA, and fighters are often confused as to their standing within their own promotion. World Series of Fighting President Ray Sefo has decided to alleviate that concern in his own organization in an unprecedented way.

Beginning earlier this week, Sefo will be releasing his own internal World Series of Fighting rankings exclusively on WSOF.com. Each division will list the current champion in the top slot, while the top five contenders in the weight class will also be revealed.

A new weight class will be featured each Thursday, and the divisions will be updated following each World Series of Fighting event.

First up, the lightweights.

The undefeated Justin Gaethje has been a fixture in the World Series of Fighting since the promotion’s second event. Eight victories in the decagon, including seven by knockout, have proven “The Highlight” as a worthy lightweight champion.

Nearing 10 years in the sport and with 33 professional contests under his belt, Brian Foster may be fighting better than ever. Despite a disappointing loss in the opening round of World Series of Fighting’s historic eight-man lightweight tournament, Foster was able to return to the field and earn two victories to complete his Cinderella story and will fight for the title in his next outing.

Jason High made his World Series of Fighting debut in November, picking up an impressive knockout win over Estevan Payan. “The Kansas City Bandit” is now 10-2 in his past 12 fights overall, with his only losses coming to current UFC lightweight champion Rafael dos Anjos and talented Brazilian standout Erick Silva.

A former finalist on “The Ultimate Fighter 16,” Mike Ricci made his World Series of Fighting debut in November with a stunning head-kick knockout of Joe Condon. Now boasting a three-fight winning streak, the talented Canadian headlines WSOF 27 on Jan. 23 and looks to establish himself as a future title contender.

Joao Zeferino is quickly proving himself as one of the most dangerous submission aces in all of mixed martial arts. Prior to his heartbreaking loss to Brian Foster in the finals of World Series of Fighting’s historic eight-man lightweight tournament, “The Brazilian Samurai” had notched seven consecutive first-round victories, including six by submission. A trilogy fight with Foster may lie on the horizon.

A Renzo Gracie-trained fighter, Ozzy Dugulubgov as quietly racked up an impressive 5-1 mark in the World Series of Fighting decagon and currently boasts a three-fight winning streak. Dugulubgov still needs a signature win to catapult to the top of the division, but he’s already proven capable of competing with anyone in the promotion.