10th Planet Bethlehem/Finishers MMA, one of the 10th Planet affiliation’s standout schools headed by Zach Maslany and JM Holland, recently relocated into a new and much larger location of 12,224 square feet at 3713 Linden Street, Suite A in Bethlehem, Pennsylvania. Classes started at the new location as of Monday, March 1, 2021, and the new space has allowed for an expanded schedule with more class options. 10th Planet Bethlehem has solidified its spot at the top of the food chain in recent years by helping to expand the east coast submission only scene with the creation of its Finishers Sub Only pro events and the Finishers Open, as well as by producing some extremely high level talent, such as #2 ranked strawweight Grace Gundrum and #4 ranked middleweight Jon “Thor” Blank. Blank also runs a Finishers sister school, 10th Planet Allentown, located at 349 S. Cedar Crest, Allentown, Pennsylvania.

The Finishers masterminds have a lot planned for their new space, which features two mat rooms, one for jiu jitsu and one for striking. They have completely revamped their website, which includes the updated schedule with additional classes due to the increased mat space. They are also setting up a room dedicated to strength and conditioning, with Bryant Pabon of Pabon Primal Performance Gym offering functional fitness training. Affectionately referred to as Finishers HQ, this new location will be a one stop shop for all of your mixed martial arts and fitness training needs. People already travel from all over to come cross-train at 10th Planet Bethlehem, and the new HQ is sure to continue to be an east coast hub for elite training. If you are interested in signing up at the new location, contact Manger and Enrollment Coordinator Andrew Jones at 484-553-7837 for more details.

Future Finishers Sub Only pro events and Finishers Open tournaments will be held at the new location, and there are even plans to include a coffee shop on site. The next Finishers Sub Only will feature an Absolute Tournament for a cash prize and will likely be held in April, although the date is yet to be determined. 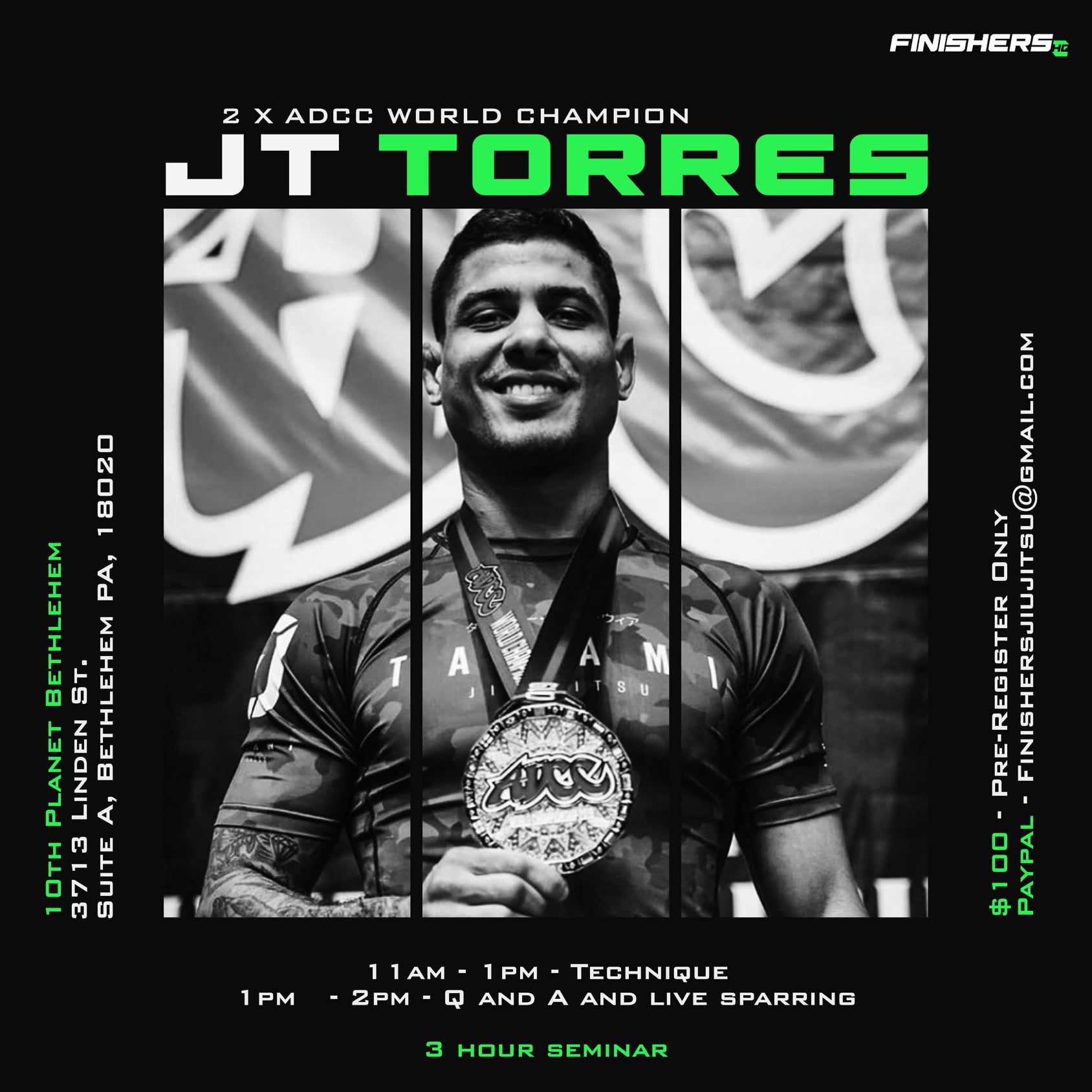 Also coming up on April 3, 2021, Finishers HQ will be holding its first seminar at the new spot, with 2x ADCC Champion JT Torres showing some of his best moves. The seminar will begin at 11 a.m. with two hours of technique and then an hour for questions and live rolls. Cost for the seminar is $100 and members who are interested can pre-register here via paypal.

Zach Maslany and JM Holland first started teaching 10th Planet Jiu Jitsu about 9 years ago, and at one point they were even living in their school in order to make their dreams come true. This is now their 4th location, after growing bigger and more well-known each year. Zach and JM have even helped quite a few other jiu jitsu schools on the east coast become 10th Planet affiliates. They both are extremely grateful that they have grown to this point and are able to follow their passion every day.