Brian Ortega in a short time, has established himself as one of the elite contenders in UFC Featherweight division.

Already undefeated in his UFC career, with a lot of hype surrounding him, Ortega solidified his superstar status with jaw-dropping victories over two other top contenders in the division most recently, Cub Swanson and Frankie Edgar.

Shortly after the Edgar win, Ortega was propelled to a shot at the UFC Featherweight Championship against Max Halloway at UFC 226. 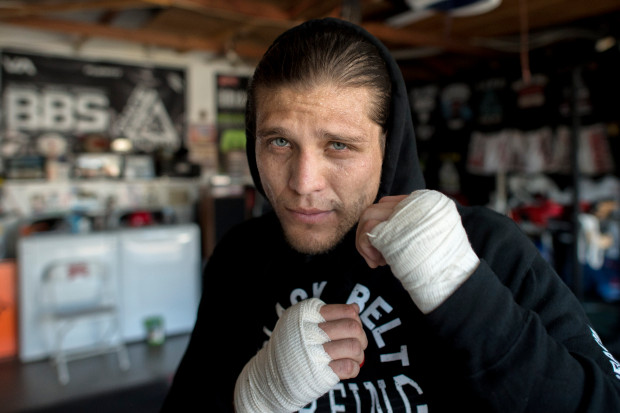 Leading up to the fight this past week, as “T-City” was preparing for the biggest fight of his MMA career, disaster suddenly struck when Ortega arrived in Nevada to not only begin cutting weight, but participate in the annual UFC Open Workouts.

It’s the most devastating news any fighter ever wants to hear during the week of the fight, heading into the actual day of the fight.

The fight being canceled because the opponent is injured.

Well, unfortunately for the red-hot breakout UFC star he became another victim of this circumstance as it was revealed that Wednesday afternoon that Ortega’s opponent Max Holloway had suffered concussion-like symptoms while training for UFC 226 and would have to be pulled from the card via a statement that was released by Holloway’s team.

Now with Ortega’s title opportunity taken away from him, UFC President Dana White quickly attempted to right the wrong the following day on Thursday at the UFC 226 Pre-Fight Conference, stating that the company tried contacting fellow UFC Featherweight Jeremy Stephens as a possible last minute replacement to face Ortega, but he immediately refused.

Fans at the press conference went into a disappointing chorus of boos upon hearing Ortega’s decision to not take the fight.

After keeping quiet when he first initially heard the news, Ortega finally came out and addressed his decision on his Instagram page now that UFC 226 is officially concluded. Ortega explained why he stood his ground to not do a fight except his originally scheduled one against the current UFC Featherweight Champion, knowing that he’s done everything required to earn the chance at the title.

“I’m a Businessman, a company man, but I’m no ‘Yes’ man,” Ortega said. “Watching the fights last night knowing I could have been performing for all of you truly took a toll on me. I stand by my decision.”

Ortega also stated that he understands the fans frustration over him not wanting to face Jeremy Stephens at UFC 226.

“Thank you to all of you who showed up to support and respected my decision,” Ortega said. “For those of you who don’t agree with me I completely understand and promise to give you guys the show of your life when I fight for the title.”