This Sunday, August 18, 2019 at 8 PM ET/5 PM PT, Eddie Bravo will be bringing back his combat jiu jitsu ruleset for the Combat Jiu Jitsu Worlds 2019 welterweight tournament in Long Beach, California. The event will feature a 16-man welterweight combat jiu jitsu bracket and competitors will be gunning for a potential $20,000 grand prize and the 170 pound title. There will also be superfights to break up the action and give competitors a rest in between rounds of the tournament bracket. The event will be streamed on UFC Fight Pass or you can go to inchbyinch.tv for tickets to attend live. Check out the bracket below. 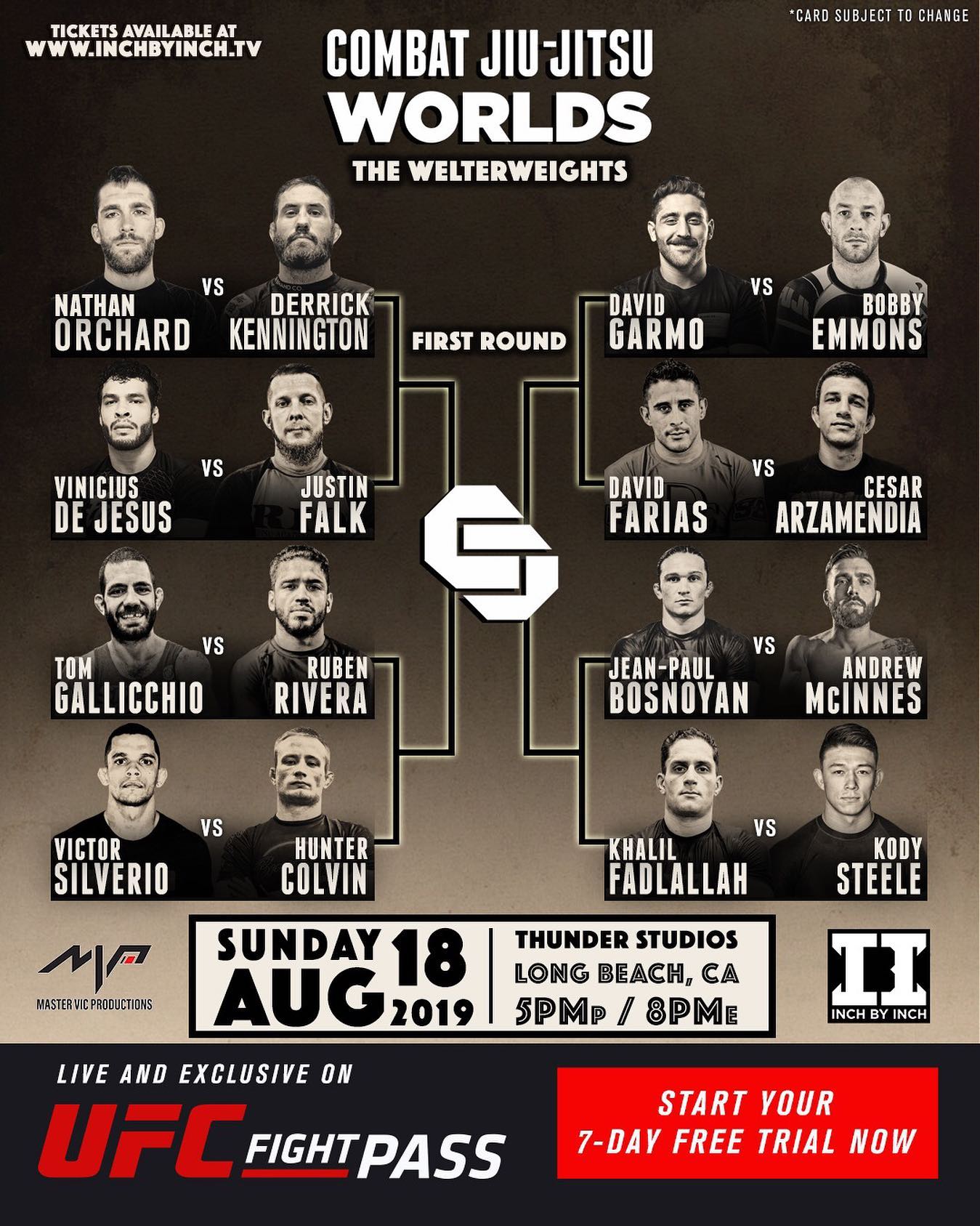 This tournament is a nice mix of some new names that will be making their CJJ debut along with some veterans that you have seen before.  Nathan Orchard is the top seed out of 10th Planet and represents 10th Planet Seattle, formerly training out of 10th Planet Portland.  Orchard is well known for coining the submission the “dead orchard,” which is essentially a triangle with both arms in allowing you to easily armbar your opponent from there.  He has appeared in countless EBI events and has competed under the combat jiu jitsu ruleset before.  The other 10th Planet representative is Ruben Rivera, who battled through the 10th Planet qualifiers to win his spot on the mat.  Winning the qualifiers not only got him his spot in the 16-man tournament, but also earned him a spot on the Subversiv team where Team 10th Planet recently defeated Team Red Bowie.  Rivera is also an instructor at 10th Planet Costa Mesa.

Hunter Colvin is another one of the familiar names in this tournament, as he appeared in the first 16-man combat jiu jitsu tournament at EBI 17.  He had a tough battle with Felipe Fogolin and really made an impression in that match.  He was brought back for Combat Jiu Jitsu Fight Night back in February of this year, where he had a dominant performance over 10th Planet competitor Kyle Boehm, submitting him with an armbar from the triangle position.  Still only a brown belt and training out of Triton Fight Center in Oklahoma, Colvin is one of the dark horses of this competition and his experience with the ruleset should serve as quite an asset.

Bobby Emmons is another multiple time EBI and combat jiu jitsu veteran, who also appeared in the first 16-man combat jiu jitsu tournament at EBI 17.  He was unfortunately injured during his first match suffering from a torn quadricep, but is now healed up and ready to get back at it.  He is a black belt who trains out of and co-owns Nice Guy Submission Fighting in Indiana.

Other notable competitors include David Garmo, UFC veteran Tom Gallichio, Kody Steele, and Jean-Paul Bosnoyan, but really it could be anyone’s night.  Make sure to tune in to check out the action as it unfolds.

By Mike Wright 16 hours ago

Rage in the Cage OKC 83 – Order and watch here