Miesha Tate: I like that Donald Trump Not a Fan of Ronda Rousey 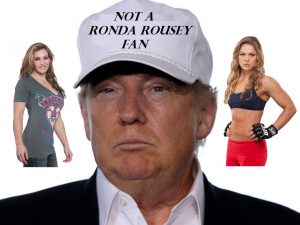 If there is one thing that current UFC women’s bantamweight champion and the likely Republican candidate for President of the United States, Donald Trump, have in common it is their disdain for former champion, Ronda Rousey.

When it comes to policy, Tate says Trump has one thing 100% right … his blinding hatred for Ronda Rousey!

If you remember last year after Rousey’s UFC 193 main event loss to Holly Holm, Trump tweeted out the below message:

TMZ recently caught up with Tate to discuss her backing of Trump.  Here’s what she had to say:

“I wouldn’t say that I’ve supported him,” began Tate. “I would say that I maybe like the idea of a Republican, just for the simple fact that we’ve had two Democratic. You know. Simple as that.

“But honestly, we do have one thing in common – he’s not a Ronda Rousey fan. … He’s said it. He’s tweeted it out before. … That’s one thing he’s got going for him, if I can give credit where credit is due – He’s not a Ronda fan.”

Miesha Tate — Best Thing About Trump Is That We Both Hate Ronda!

By Mike Pendleton 6 mins ago

By Staff Report 43 mins ago