The return of Brye Anne Russillo is on the horizon. Russillo is the female fighter that busted onto the scene after MyMMANews did an article with her in September of 2015 where she was quoted as saying, “I can’t cut my tits off and put them on the side, they weight 12-pounds,” – which led to a spiral of crazy articles, radio interviews, and recognition by CNN, ESPN, FOX and the rest of the top media outlets in the world.

Russillo (1-2), now makes her way back to the ring on April 15, 2018, for Jackhammer Promotion’s English Invasion III. Russillo will be a featured fight on the main card, which will be headlined by a Timmy Persaud (USA) and Mickey Becan (England) rematch for the Jackhammer Amateur World Title.

Russillo is scheduled to fight at 145-147lbs. in a K1 bout. A couple of names have been tossed into the mix as a possible opponent, though nothing is concrete at the moment. 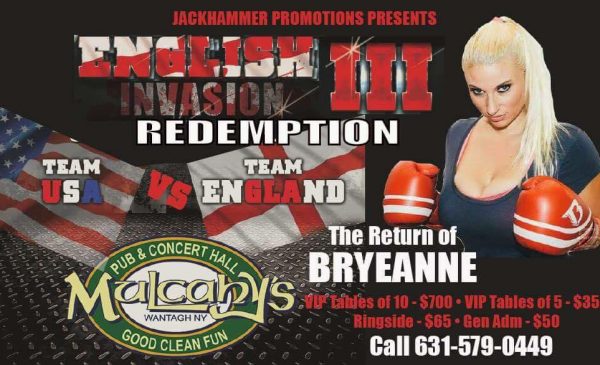 On Sunday, January 7, 2018, Brye Anne Russillo will be joining our reporter, Kyle Carroll, via Live Facebook Stream at noon. The FB stream will be taking place at The Greene Turtle in Smithtown, NY.

Follow My MMA News on social media at @MyMMANews for updates about Russillo leading up to her return to the ring on April 15, 2018.

By Andrew Sumian 15 hours ago