Ring of Combat continues to be one of the premier regional shows in the country as over 140 fighters have competed for Louis Neglia and Frankie Perez and gone on to larger stages with many of them finding successful careers in fighting. The pandemic was a roadblock that has finally been broken through as ROC 73 returns to Atlantic City, NJ this Saturday, July 17th, at the Showboat Hotel.  MyMMANews will be in attendance bringing you live results and the event can also be seen live streaming on FITE TV.

This is a preview of the full fight card as of fight week and is subject to change.

This is a very interesting fight for both fighters.  Kline and Alcala fought at Triton Fights in June of 2019 with Kline taking home a unanimous decision win. Now in the rematch, they will face each other to see who has improved more and under pro rules with 3 five minute rounds

This is the pro debut for both of these men as well.  Jiminez is coming off of a close decision, but a loss at ROC 72 in June.  He has shared the cage with some very talented guys in Matt Caracappa and Torance Lacour and he does the same thing with Fitzroy who has an impressive 6-1 record, but hasn’t fought since December of 2019.  Five of his six wins have gone to the judges scorecards.

Two bright pro prospects from excellent camps battle it out in another matchup in their pro debut.  Nelson went undefeated in 5 amateur fights and Thorpe fighting out of Georgia, went 8-3 in his amateur career

Lopez has 5  finishes among his 6 victories and looks to halt the peaking Rodriguez who after a split decision loss to start his pro career, has put together 4 straight wins all by decision which includes a victory over former ROC champion Dennis Buzukja.

Valenzuela returns after a 5 year layoff rom the cage.  With 8 fights on his resume, we will see how quickly it takes him to get reacquainted with live action after the long time between fights. Don’t let Powell’s 4-6 record fool you.  Diamond is a dangerous fighter who has finishing power and is a slick southpaw who fought former UFC vet George Sullivan to a split decision loss which I was in attendance for and scored the fight for him.  Powell is fast and athletic and fine-tuning his skillset at Jackson Wink now.  I expect a big performance from him.

This is another rematch as Brown caught Ahearn in a guillotine choke in the first round of ROC 71 to get the submission win.  Ahearn will have to be more careful looking for that double-leg and Brown will look to make it a repeat of having his arm raised in victory against the same opponent.

Dulaney won his first 2 career MMA bouts but then lost his last 2.  He has a boxing background with a bunch of bouts on his resume and obviously will look to make this as stand-up battle.  Meshkhoradze won in his pro debut at Bellator but then fell at ROC 67.  His layoff has been over 2 and a half years from live action.

Gjetja is one of the top young prospects in the area as the Albanian community continues to produce high level mixed martial artists.  Gjetja grew up in Italy but moved to the US four and a half years ago and is honing his skills and following his life-long dream of becoming a champion.  He is a very intelligent and hard working fighter who at 5’11” has a lot of length and has also been working with elite Glory  kickboxer and fellow Albanian Elvis Gashi.  Ashmoz is a wildcard as he is from Israel and has not fought in the United States before so it is really difficult to get a scouting report on him.  He has taken up residence in NJ and is training in Fairfield NJ at the very well respected camp of Murat Keshtov at k-Dojo Warrior Tribe MMA.  This is a very intriguing contest.

Mantello in my eyes is one of the top pro prospects in the Northeast and has next level talent. He has mad skills everywhere and if he can stay injury-free, I believe he will eventually be fighting in the UFC.  Diaz is another fighter making his US debut as he hails from Chile and has fought exclusively in his home country.  Diaz won his first 3 fights and is coming off his only loss in his last bout which was in 2018.  He has a tall order in trying to stop the Quiet Man who last fought at Triton Fights in March and won via armbar.

Jeff Lentz is an icon on the regional scene.  He is a Bellator veteran and one of the first local fighters to be on The Ultimate Fighter in 2010.  Jeff has made MMA into a career and lifestyle as he owns and operates his academy, Jeff Lentz MMA and Boxing in Atlantic County (NJ). Lentz MMA is the culmination of his direct experiences in and around the cage and the ring.  He is always trying to give back to the community by providing a martial arts school that embodies ancient martial arts traditions combined with the most current techniques and training methodologies.  As far as this fight, it is business as usual as Lentz has been in the cage with a multitude of high level competitors including current UFC fighters Bill Algeo, Jared Gordon, and Alex Caceres.

Gonzalez is another warrior who has never been afraid of facing the top competition.  He has fought current UFC vets Bill Algeo, Mike Trizano, and owns a victory over Pat Sabatini.  Gonzalez is a crafty southpaw and like his opponent, has no issues wherever the fight may go, but I do see him looking to take this fight to the ground and use his submission skills that are his bread and butter.  Both of these guys have tremendous cardio and hearts and this is a fight very worthy of the final bout of the night. 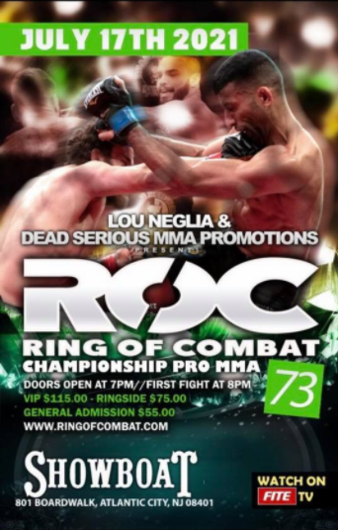 ORDER AND WATCH ROC 73 BELOW: