The Bellator 210 under card is stacked like only a few in the promotion’s history have been. The light heavyweight division is currently wide open for the taking. Unbeaten prospect Jordan Young looks to continue his climb to contender status, facing his most experienced test in the form of Anthony Ruiz who has nearly five times as many MMA fights.

This will be Jordan’s second fight at light heavyweight after competing as a middleweight for quite some time. Young feels he is finding his stride in what is a much healthier fit.

“Everything’s been going good. I’ve had a nice productive camp. We continued with our momentum from the previous camp, our first camp for 205. This is going to be the best cut of my career. Everything is on point. Like clockwork.”

“Before my last fight I knew I was going to be a light heavyweight. So before camp even started, me and my strength and conditioning coach Phil Daru, who is one of the absolute best in the world at what he does; we started working on building my base up to be prepared to be, not just a 205 pound fighter but one of the best 205 pound fighters. This is more of what my body actually is. I was a middleweight for a time period but then I started to force it, and that wasn’t natural for my body. It was hard for me to lose weight. I was fighting against myself. Now it’s hard for me to keep weight on but not necessarily in a bad way. I’m keeping a good walk around weight and I’m able to eat the right foods and the right amount. I’m not having to limit anything or not properly recover after these hard training sessions“.

“You can’t take away from your body. I’m 23 years old, making me do the weight cuts was fighting against myself. At that time period 24, which I’m turning this Friday (11/23), you need to be feeding your body to gain size, to gain strength, to gain explosiveness. You’re not able to do that if you’re taking away calories from your diet. You’ll feel it in your training regimen as well, if you’re not getting the proper amount of calories, your gonna wake up sore, you’re going to be tired. At the point when you should be flourishing, going hard, improving, not feeling diminished.”

Looking back at his first fight at 205 lbs., a win over Jamal Pogues at Bellator 201.

“That fight was a good fight for me. First round I outclassed him. Second round he took me down. With all due respect I lost that round. If you go back and look at that round, I took zero significant strikes. He pretty much took me down, put his head in my lap and tried to do my girlfriends job.” “The goal is to go out there and finish fights. Not sit there and hug on another man. He had his arms wrapped around my legs. It’s my job to peel myself up that wall. As soon as we got through that fight, got to the back, we worked on some things to make sure that doesn’t happen again. In the third round he tried to take me down again. I was able to get to my feet a couple times and end the fight with a submission in the second half of the third round. For me it felt good cause it was a learning experience without taking a loss. I was able to stay hungry after that and go back to the gym and improve in those areas. Everything is a plus for me, that’s how I view things in my life.”

A fight finisher Young has seven stoppage victories all by submission, but doesn’t feels he’s specifically looking for the submission.

“It just played out that way. Each fight is a different movie if you will, like the plot is always different. These fights don’t belong to me they belong to the moment. When I show up to these fights, when the moment comes it just happens and so far mostly what’s been happening in my eye is that I come out and I look to put the pressure on people. And coming forward with long straight punches. People are ducking under and looking to slow the fight down or get me on the ground. I don’t feel like I been put on my back by guys looking to advance position and punch me unconscious or submit me. I feel like I’m getting taken down by a guy looking to hold me down and keep me in position, trying to win by running the clock out.”

Everyone likes a knock out but Young is overly concerned with getting his first.

“The knock outs going to come. I’m very young in the sport. I’ve taken relativity no damage in this sport. I’m going to be here for a very long time. So it would be very naive of me to think that the knock outs not going to come at some point in my career. I’m not just thinking one knock out, it will be many knock outs.” “Like I said these fights don’t belong to me. They belong to the moment. I can’t sit on the forefront and say this is exactly what’s going to happen because in all reality the fights that I’ve finished with submission, I feel I could have knocked some of those guys out as well. But in the moment when the opportunity presented itself and it was either go or let that go and get to your feet to look for the knock out or go ahead grab that because it’s there and go home with both your checks. And in the moment I’ve chosen both checks every time”

And when it comes to the task at hand, Anthony Ruiz at Bellator 210, there’s a plan in place to get attention.

“Yeah I like it for me. He hasn’t fought. He fought one time last year. He hasn’t fought at all this year. I don’t know what his motivation would be to step out of, I believe he was in retirement, to fight a young animal like myself at forty-one years of age that he is. But I respect him for taking the fight and I’m looking forward to showing up and showing that the 60 fights not only don’t mean to much, but also the difference between me and what the other, I think this will be his fifty-ninth fight, so the other fifty-eight people he’s fought. “I would like to put a stamp on this fight and make it stand out from the rest of his other twenty-two defeats.” 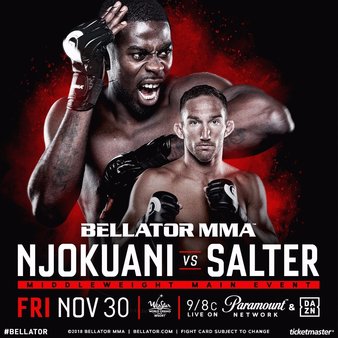 By Nicole Bosco 15 mins ago

By Eric Kowal 51 mins ago