Juan Gonzalez is 2-0 in 2019, riding a four-fight win streak; and looks to capture the CFFC lightweight title Saturday night in Atlantic City.  We speak with “The Demon” here.

We look at CFFC 79 this weekend, the title fight; how big is this, you’re first professional title fight?

“It’s big! It’s my first professional title fight. The way I see it, it’s my time. So, his belt is already mine, it doesn’t matter what Nicholas does, it’s mine. I’m going to get my belt, that’s it. It’s my time.”

Nikolas Motta, his last three victories, I believe: TKO, knockout, he’s a Brazilian striker. What do you think of the match up?

How much does hard work, and work ethic, describe Juan Gonzalez?

“It’s everything! I see how hard as Cowboy (Donald Cerrone) works. I know that I got to work just as hard. It’s just about how bad you want it, how hard you want it. You gotta work. Its work, you gotta work for it. I’m not going to get out worked.”

CFFC 79 takes place at the Hard Rock in Atlantic City, New Jersey, and can be seen on UFC Fight Pass. In all, the card is scheduled to feature four championship bouts.

Check out the full interview with Juan Gonzalez at the top of the page. 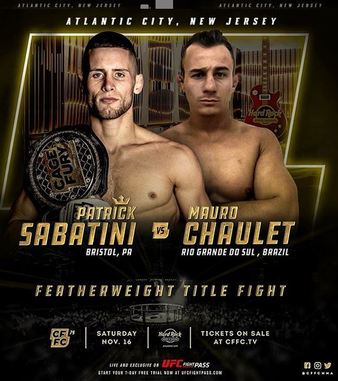