This Saturday, November 16, 2019, the masterminds from Finishers MMA are back with their first Finishers double header event featuring the Finishers Open 3 and the Finishers Sub Only 10 all at the Parkview Inn & Conference Center in Allentown, Pennsylvania.

The Finishers Sub Only was the first east coast promotion to implement EBI rules and give the guys who are looking to get onto the EBI stage a stepping stone on the way to get their name out there and make some cash in the process.  The events have always been streamed for free live on youtube and they have a professional photographer on duty, Giulliana Fonseca, who provides the competitors with breathtaking action shots to help them promote themselves.  The Finishers Open was created later on due to the increasing demand for competitors to have a crack at EBI rules.  The Open is more like a local tournament, where any belt level can register and there are multiple weight classes with men’s, women’s and teen divisions.  Winning one of the Open divisions can help you to earn your shot at getting a spot on the pro event, whether it be in a cash tournament or just for a superfight.

On Saturday, the Finishers Sub Only 10 will include a 16-man tournament at 185 pounds and a 10-woman tournament at 105 pounds.  Some of the stand out names in the 185 pound bracket include ADCC West Coast Trials silver medalist Stanley Rosa, combat jiu jitsu veteran Alan Sanchez, Enrique Galarza, and Danaher Death Squad’s own Nick Ronan, who has competed in previous Finishers tournaments at 155 pounds so will be giving up some weight here.  Finishers MMA also has two of their own students in the 185 pound tournament, Zack Edwards and Rene Sousa, who both have been killing it in competition lately and were recently promoted to brown belt. 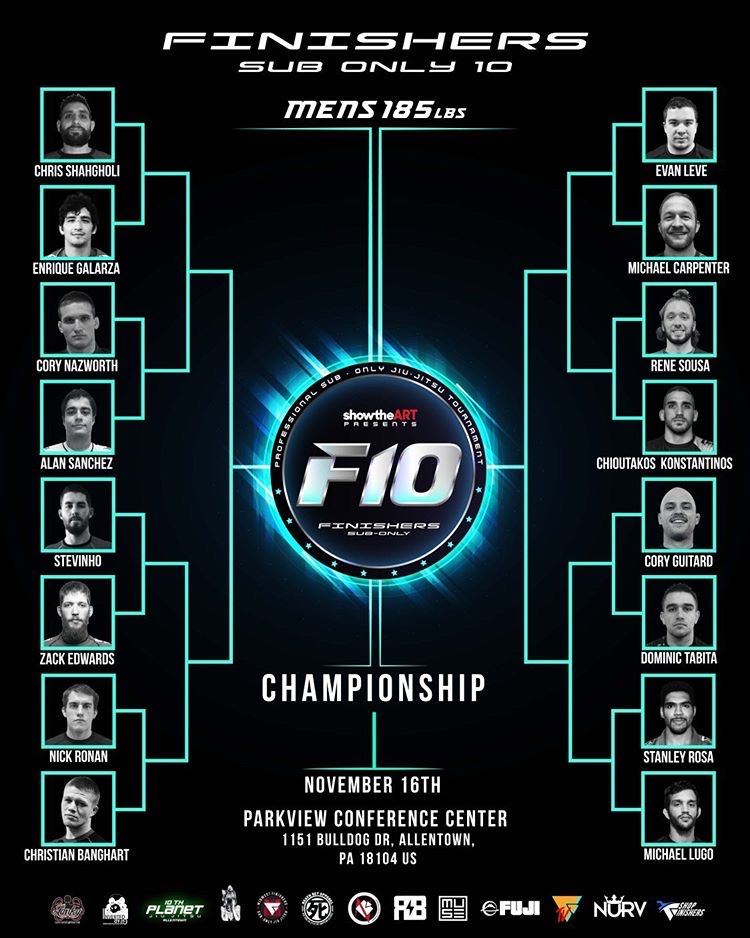 The 105 pound tournament consists of 10 women and the favorite to win in most people’s minds would be Grace Gundrum.  Grace has not lost a match in years and thrives under the EBI ruleset in particular, with a 4-0 record in her EBI superfights and taking home the 105 pound Onnit Invitational title in 2017.  With that said, there are a lot of tough girls in this bracket that could potentially take out Gundrum on the way to the title.  Christina Pinto and Linda Mihalec both competed in the Finishers 9 115 pound tournament and put on a great showing with both ladies making it to the quarter finals.  Lauren Strausser and Kate Gondales are both Finishers veterans as well and had a superfight against each other at the Finishers 9.  Overall it could be anyone’s day and the women always put on some exciting matches. 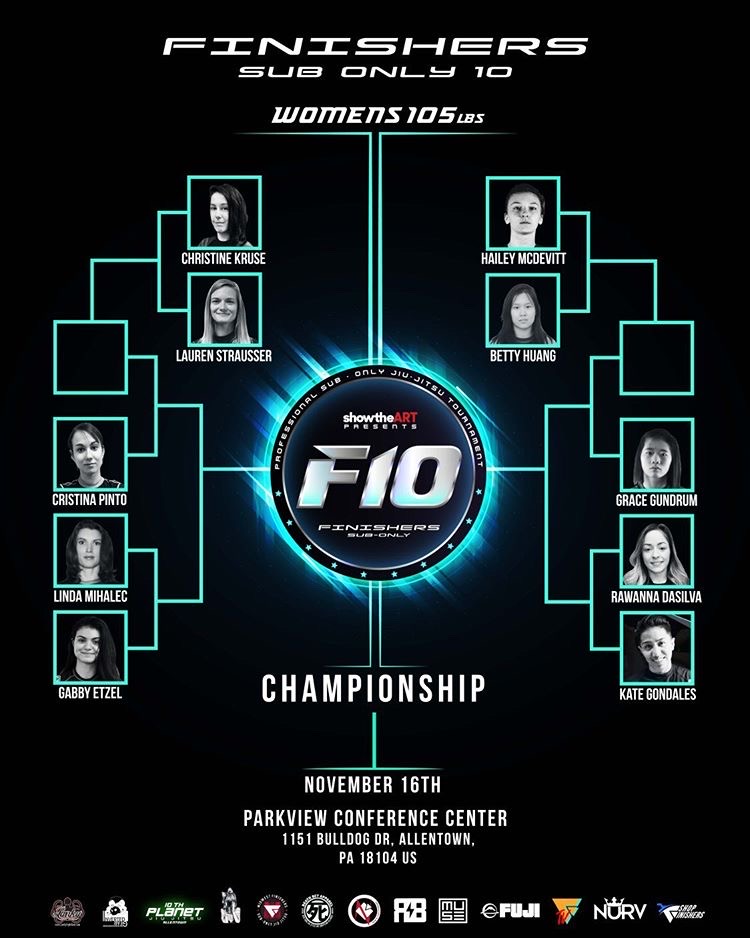 The Finishers 10 will have a stacked undercard of superfights in addition to the two tournament brackets and a couple of main event superfights to break up the rounds of the tournament and give the bracket competitors a break. JM Holland, who runs the Finishers Sub Only and Open along with Finishers co-owner Zach Maslany, will be featured in one of the main event superfights against fellow black belt Zach Green of Gracie Humaita Philly.  Devin Vogel, another Finishers MMA competitor who was recently promoted to brown belt, will be taking on Renzo Gracie standout Damien Anderson.  The other main event superfight will feature EBI veteran and Kevin Berbrich, who is flying out to the east coast from 10th Planet Poway/10P Freaks to face Andrew Kochel, a Finishers Sub Only veteran representing Valley Jiu Jitsu.

By Laura Kent 2 days ago