The Sparta Combat League King of Sparta Tournament Series is possibly the most underrated event in all of MMA. Eight competitors are selected to compete in three different disciplines. All full fights and all in one night for the potential total of ten rounds for the finalists.

Welterweights went to war Saturday night in Golden, Colorado with eyes on the ten thousand dollar prize. This is the fifth Sparta Combat League tournament of its kind with the inaugural event less than a year ago. Current Kings and Queens of Sparta include: 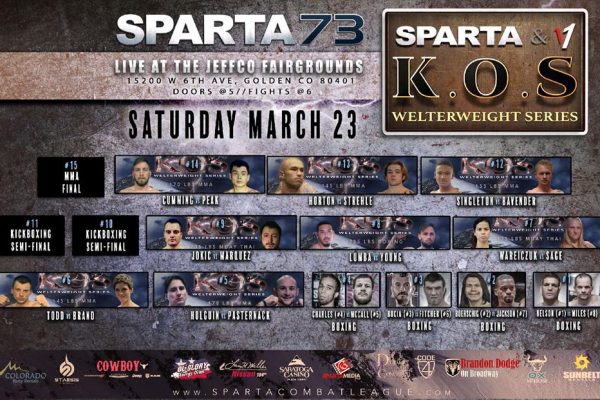 L.T. “Smash” Nelson defeats Joe Miles via TKO in round one

There are few welterweights with as much overall experience as L.T. Nelson. With two more fights to go, Nelson made quick work of Miles, getting the TKO finish in one minute and thirty seconds into the opening bout of the night. Nelson is also the current King of Sparta at 155 pounds.

Jackson started out strong, drawing first blood from Boerschig early in round one and dominating on exchange volume. Boerschig took a little longer to warm up, but found a second wind in the later rounds that allowed him to pull out the decision win. The blood dripping from Boerschig’s nose would show up again later in the night on a whole other level.

Shane Fletcher defeats Zak Bucia via TKO in round three

Though no stranger to the ring, Bucia had difficulty finding his rhythm against Fletcher who was insistent on pushing the pace. Fletcher took advantage of his cardio conditioning throwing more volume and defeating Bucia via TKO in round three.

Neither of these to welterweights are known for their dominant stand up game. McCall’s constant movement and high volume kept Charles on defense for most of the fight, earning McCall the decision win.

L.T. Nelson defeats Shane Fletcher via TKO in round one

Nelson made it very clear that he is not paid by the hour. He also competes for Glory Kickboxing and was in his element tonight. A perfectly placed knee under the right side rib collapsed Fletcher immediately only one minute and eighteen seconds into round one.

During the kickboxing rounds, it became evident why Boerschig was the number two seed going into the tournament. McCall was able to weather the storm through round one but was dropped in the second round with a solid right hand, taking minutes before he was able to recover with the help of the medical staff and exit the ring. 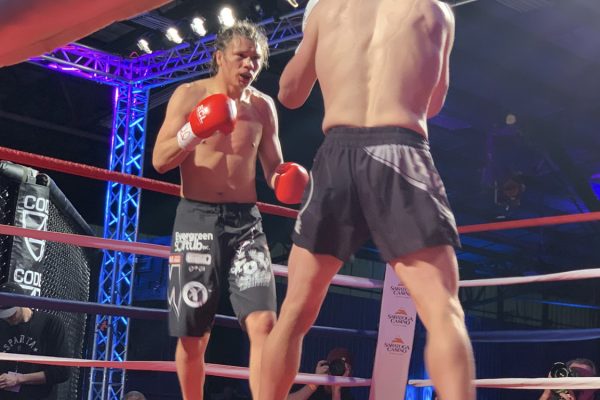 After both men made quick work of their kickboxing rounds, they moved on to the final test of skill in the cage. The saving grace for these competitors is that the MMA fight is only three five minute rounds rather than five.

The earlier nose bleed that Boerschig embraced in his boxing round opened up again in round one of this MMA bout. It is very likely that the nose is now broken, though Boerchig refused to be distracted despite cage looking like a war zone. Both men pushed the pace with a dynamic stand-up battle. Boerschig took several shots to try and get the fight to the ground but Nelson refused to go down. Leg kicks from Nelson were able to slow Boerschig down towards the end of the fight though he remained a constant threat, not allowing Nelson to take his foot off the gas pedal.

The Colorado crowd at this Sparta Combat League event was well acquainted with L.T. Nelson. The grit of Boerschig was undeniably impressive and he made some fans. 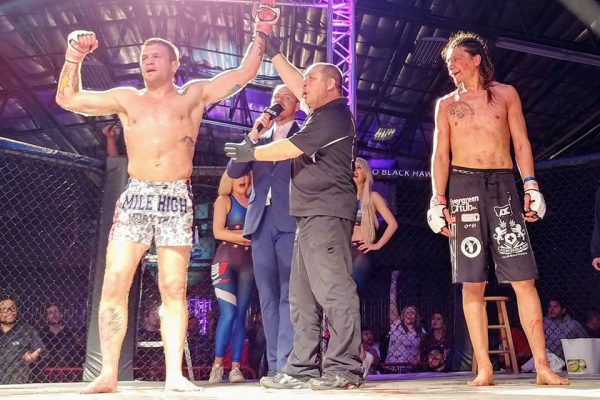