The attainment of GREATNESS is reserved for those that are willing to work, striving to transform their dreams into a reality. Nothing comes easy, as sacrifices and undergoing trials come with the uneasy territory. Eight years on the MMA grind, Kyle Stewart is currently on a mission of capturing greatness going into his fight at LFA 33.

This fortune may be credited to the many winning accolades, and hard labor “GUNZ UP” Stewart puts into his profession. However, his “go-getting” mentality was birthed long before his cage fighting venture.

Sgt. Kyle Stewart’s time in the U.S. Marine Corps saw the machine runner combating many challenges on the battlefield while serving his country in Afghanistan from 2007 to 2015. Through his military junket, the seeds of resiliency were planted, breeding a mental toughness capable of taking on all challenges. As a member of the proud Marines, Stewart understands that he represents something much bigger than himself. That incentive provides him with a more significant motivational push going into each battle.

“The Marine Corps transformed me from a boy to a man, and into a warrior,“ Stewart said. “I have a different type of grind and mental toughness.  Not only that but knowing that every time I step into the cage I represent the Corps is a huge motivating factor for me.  I accepted a long time ago that eventually I could be knocked out in MMA.  But I don’t fear that.   The only thing that I fear is quitting and letting down all of my boys that I represent.  I would accept ten losses by KO before I ever quit in the cage.”

Undefeated professional record of 8-0 and ranked number two Flocombat Welterweight contender Stewart has made strides in his ascent up the MMA ladder. Fighting out of the Arizona Combat Sports fight team. Stewart’s training has built him for success.  Opponents have become flustered in the stand-up battle with his fluid switch of Karate and Kickboxing expertise, and wrestling defense as many have found themselves on the receiving end of a TKO/KO finish. 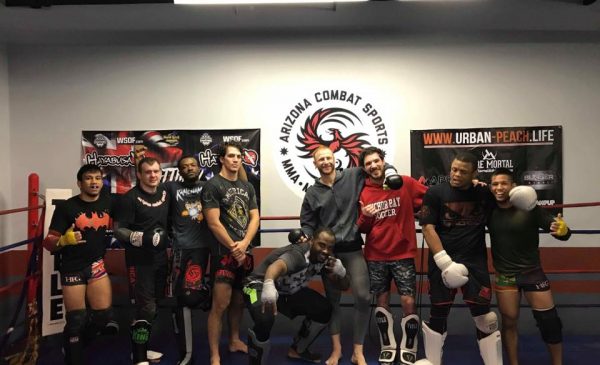 With success also comes disheartening setbacks. Multiple surgeries and falling short of prestigious opportunities the road in the fight game has been a fierce uphill battle for Kyle Stewart. However, the hurdles have not put a halt to his mission.

“I have had many setbacks in my career in the form of knee surgery, ankle surgery, shoulder surgery, etc.  I have always taken the approach of being motivated by this type of adversity.  I know that when I overcome these obstacles, it shows the people that support me and follow me that as long as you keep moving forward, you can be successful.  Like Rocky Balboa said ‘it’s not about how hard you hit it’s about how hard you can get hit and keep moving forward.’“

The decision in moving forward couldn’t have been a better choice for the Marine Corps Veteran. Also as his journey continued, it couldn’t have come at a better time. On February 16, Stewart will have to put his combat gear back on and have his “GUNZ UP”, as he will going into battle in the main event attraction at LFA 33, live at the Bomb Factory Arena in Dallas, Texas.

Looking to throw a damper on Stewart’s plan will be his opponent, another undefeated welterweight Jaleel “The Realist” Willis. Jaleel Willis is ranked fourth place on the Flocombat Welterweight chart and Bellator FC veteran. Stewart seems to be unfazed by Willis’ fight resume. Mental prowess, skills, and experience Stewart believe he excels in all sectors over his opponent. The attributes according to Stewart spells VICTORY at LFA 33.

“I’ve always taken pride in the fact that I’ve fought gamed opponents.  Many guys pad their records beating guys who have losing records.  Most people call those fighters ‘tomato cans.’  I feel like it shows that I’m a real fighter looking for real fight opportunities.

“Jaleel calls himself ‘The Realist,’ but he’s going to find out what it feels like to be in the cage with a real fighter.  He can’t stand with me, and his only chance is to try and hold me down for 15-minutes.  He has no chance of out-grinding me or breaking me mentally. Come February 16 I’m going to show everyone the difference between a seasoned experienced professional and a fighter that padded his record fighting ‘cans.'”

Greatness, what is one prepared to do to obtain it?

Greatness looks to be a touch away for Kyle Stewart if he is successful in defeating Willis. Although snubbed out of past career opportunities the UFC is always on the hunt for talent to add on their roaster, with Stewart and Willis being amongst the fighters on their radar. This incentive makes the stakes very high for both contenders, as this is the big break Mr. ‘Gunz Up’ yearned for in his chase for greatness.

“For me capturing greatness is getting my hand rose wearing a pair of gloves that say UFC. I’ve paid the price, I’ve put in the time, and I’ve passed every single test I’ve had to face.  Through surgeries and setbacks, I’ve kept my focus on that three letter acronym (UFC).  I’ve said, ‘beware the fury of a patient man,’ and so far I’ve been very patient, but come February 16 I’m gonna bring the fury!!!   It isn’t just about winning it’s about proving a point and taking what I have suffered for!”

Will a patient man’s hardship be rewarded? Tune in to Legacy 33 on AXS TV to watch the story unfold. 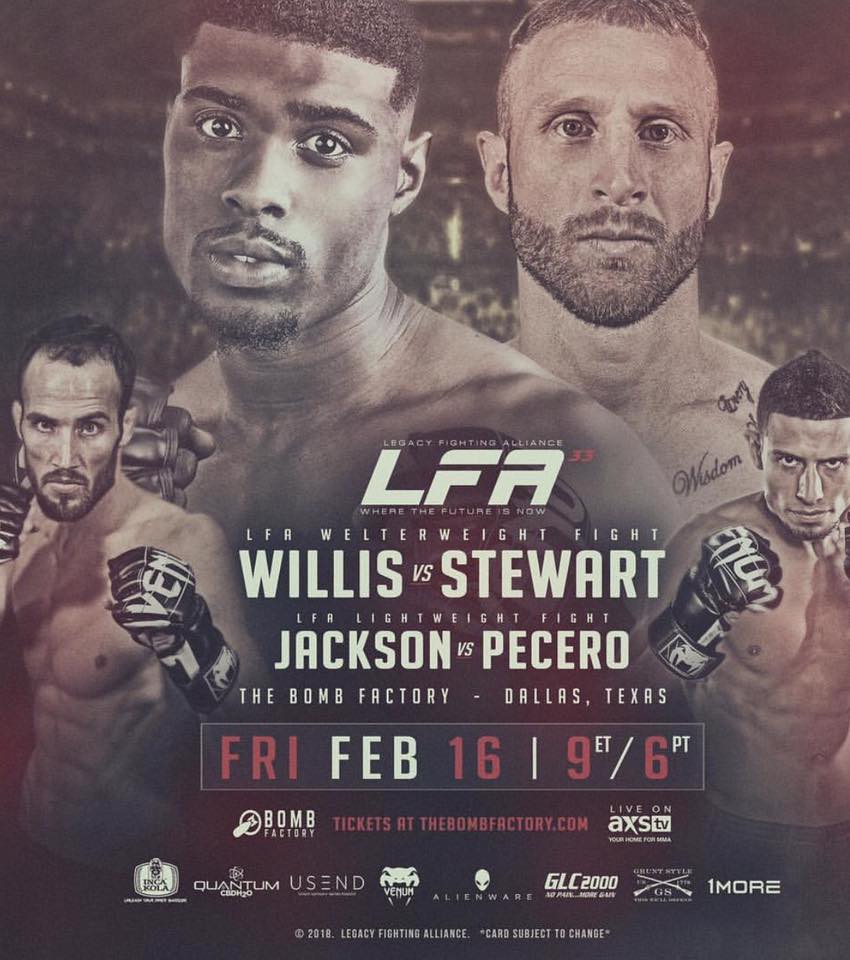