McMahon tells MyMMANews, “I’m excited to announce that Titan FC has signed Jason Soares, one of the top ranked featherweights in the country. I’ve known Jason a long time and have watched him develop into an exceptional mixed martial artist. Jason has a ton of hype and is on the verge of signing to the UFC but he will step into deep waters immediately as he faces Luis Gomez, who is a very tough and talented champion that recently had a highlight KO of Super Sodiq Yusuff, another highly touted prospect. This fight will be fireworks for sure!”

Gomez (6-1) had back-to-back wins under the Titan FC banner in 2017 to include the title fight knockout win over Yusuf.  Gomez also competed on Dana White’s Tuesday Night Contender Series last summer, losing by way of submission to Dan Ige.

Soares (10-0) has no professional losses to his credit except for an exhibition bout on season 22 of the Ultimate Fighter where he lost a majority decision to Julian Erosa.  Since then Soares won two more bouts and is looking to continue his streak with a title win. 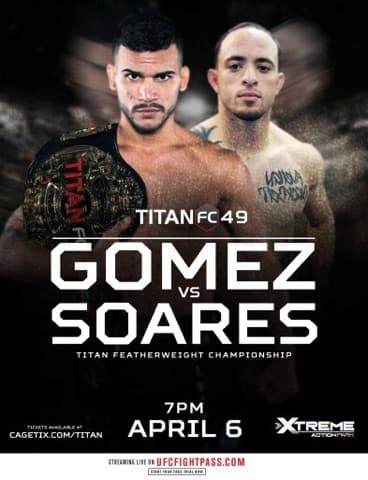