We’ve seen both of these talents have success in the UFC, and we’ve seen them both falter. We saw Hardy make his UFC debut just two months after Greene made his, which makes this fight that much more interesting. 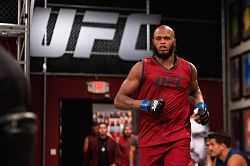 They’re at a similar level to one another, this was really the perfect heavyweight match up to make. They’ve both made vast improvements since we first saw them compete, it’s been a lot of fun watching these two grow and evolve.

We first saw Greene come onto The Ultimate Fighter back in 2018, where we saw him go 1-1 on the show, first knocking out 30+ fight veteran Przemyslaw Mysiala, before being submitted (rear naked choke) by the seasons winner Juan Espino. 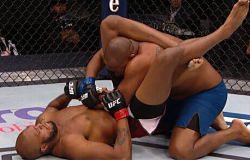 Greene wasn’t able to capture the LFA title, but he lasted all five rounds, losing the fight via unanimous decision, which is pretty insane when you realize he’s a smoker, or at least he was at that point in his life.

Greene racked up three-straight UFC victories from November 2018 to June 2019, submitting (triangle choke) the 4-0 Michel Batista in his promotional debut, a fellow TUF 28 castmate, and an Olympian in freestyle wrestling.

Batista actually got a pass in the preliminary round because Daniel Cormier was forced out due to weight cutting issues. He ultimately placed fourth.

After winning his promotional debut, Greene rematched Jeff Hughes, the man he challenged for the LFA heavyweight title against. This time Greene was awarded the split decision victory, and he’d now avenged his most recent defeat. 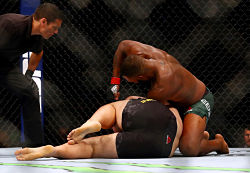 Greene next fought Junior Albini and quickly TKO’d him at 3:38 of round one, improving his record to 8-2. After this is where Greene ran into some issues, as he was TKO’d by former FNG Heavyweight Champion Sergei Pavlovich.

He was then matched up with 70+ fight veteran Aleksei Oleinik, where he was submitted (armbar) toward the end of round two. 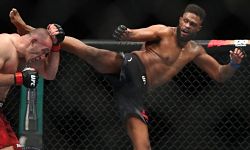 This fight actually showed improvements on Greene’s behalf, he just simply wasn’t ready for someone of Oleinik’s experience.

Of Oleinik’s 59 wins, 46 come via submission. He’s a black belt in Brazilian Jiu-Jitsu, he’s a 4th-degree black belt in Japanese JuJitsu, and he’s an International Master of Sport in Combat Sambo.

Greene did fight off a number of submission attempts from the Russian grappler, but ultimately, he just got caught.

After falling from 8-2 to 8-4, bringing his UFC record to 3-2, Maurice Greene knew he needed to change something. He decided to go out to Albuquerque, New Mexico to join the Jackson-Wink camp. After defeating Gian Villante in round three of his last fight via submission (arm-triangle choke), he and his family moved out there permanently. 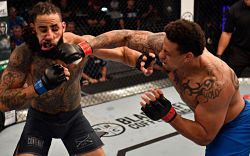 Greg Hardy has been a lot of fun to watch grow into a well rounded mixed martial artist. He’s such an incredible athlete, and he has absolutely wicked power.

After going 3-0 as an amateur from November 2017 to February 2018, he turned professional and made his debut on the Contender Series in June 2018.

Hardy fought Austen Lane, who’s also a former NFL star, having played for the Jacksonville Jaguars, Chicago Bears, Detroit Lions, and Kansas City Chiefs. Lane came into the fight with a 4-0 record, all four rounds via first-round knockout, and Hardy knocked him out in just 57 seconds.

Hardy returned two months later in August and picked up a 17 second knockout, again on the Contender Series, before knocking his next opponent out in 53 seconds at Xtreme Fight Night 352 in September.

This granted him entry into the UFC, and he made his debut in January 2019, the night TJ Dillashaw fought Henry Cejudo.

Though he was disqualified in his debut for an illegal knee, he got a lot of eyes on him being in the co-main event. It was a little bit too quick or hard of a push, he only had three fights and he was co-main eventing an event with a title fight on it, but in the long run, it may have helped him. 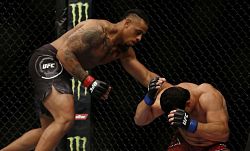 We haven’t really seen Hardy out of his element like we did that night, even in his lone defeat since. Hardy rebounded by knocking out Dmitry Smolyakov and Juan Adams, both in round one.

Hardy then defeated Ben Sosoli via unanimous decision, though his win was overturned to a no contest because he used his asthma inhaler between rounds. He and his team asked if it was okay to use, and they were given the go ahead by everyone they asked, but it is indeed prohibited.

It’s a bit unfortunate, people that have asthma can’t breathe like normal people that don’t have it, it helps him breathe like you or me. Honestly, it was just meant to be this way. From Hardy’s domestic violence cases, to his debut where he landed an illegal shot, to this, where some would say he was cheating, Greg Hardy’s story is supposed to have controversy. It’s evident at this point. 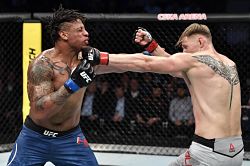 Hardy then filled in for former UFC Heavyweight Champion Junior dos Santos, who was supposed to be facing Alexander Volkov next, but was forced out of the bout with an injury. Hardy took this fight on two weeks notice, which is pretty insane when you think about it.

Volkov is no joke, the guy was 30-7 coming in, and is a former M-1 Global and Bellator Heavyweight Champion. Hardy stayed composed throughout the fight, he didn’t get discouraged, and though he lost all three rounds, he didn’t get finished. He did as well as he possibly could have, and he grew immensely from this fight.

Hardy followed this up with a unanimous decision victory over Yorgan De Castro at UFC 249, the first event back after Covid-19. Now he looks to continue on this path he’s created for himself, and it starts this Saturday with Maurice Greene.

We mention that Greene’s with the Jackson-Wink camp, you’d also like to know Hardy is a part of American Top Team, they’re both with elite camps. They’re both getting instruction from some of the smartest MMA minds in the entire world. 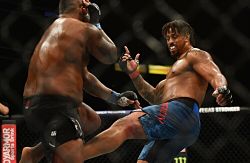 With how hard Hardy hits, along with his technique that’s coming along with it, he’s a very dangerous opponent for anyone. All it takes is one shot, and from a heavyweight that’s played football his whole life, it makes it all that much more dangerous.

Football players are some of the best athletes in the world, they always translate into mixed martial arts quite well.

Maurice Greene may be a little bit more technical with his striking, he definitely has a wider diversity of attack, but he’s not quite as powerful. He’s also better on the ground than Hardy, but he’ll have to get him there in order to showcase it. That’s something we haven’t seen much of, Greene’s wrestling, or Hardy’s wrestling for that matter.

Who do you see winning this exciting heavyweight showdown between Maurice Greene and Greg Hardy?