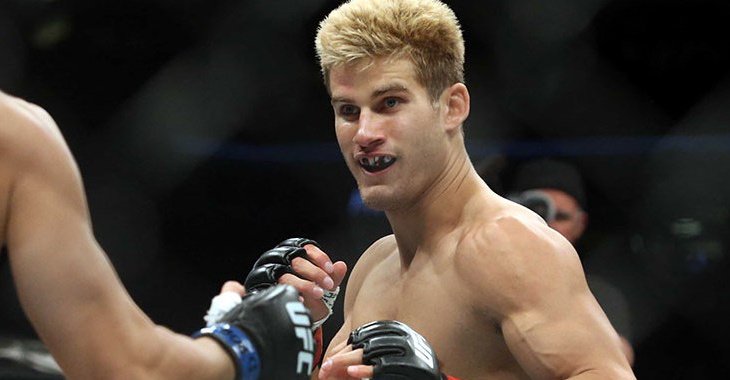 UFC’s Sage Northcutt picked up another win this past weekend at UFC Fight Night: dos Santos vs. Ivanov, but not long before Northcutt made his walk to the Octagon, he surprised many in the MMA community when he said that he believes his fighting future is actually at heavyweight.

Northcutt, who’s fought at both lightweight and welterweight so far in his MMA career, spoke to TMZ Sports shortly before his big fight Saturday night versus Zak Ottow and talked about how much better he feels fighting at welterweight but he didn’t stop there.

“I personally think I may end up fighting at heavyweight in the future.”

Although Northcutt, who’s 22, is most definitely a very muscular, athletic specimen of an MMA fighter, he simply just doesn’t have the frame size or body type required to compete at heavyweight.

He is also one such guy who is a ‘tweener’ where he’s a little too big for lightweight and not quite big enough for welter and would probably benefit from a 165-lb division and has even fought there at that weight in several earlier fights in his career.

Northcutt also mentioned in the interview how much better he feels when competing at 170 versus 155.

After losing his first two fights at welterweight in his UFC career, to Mickey Gall and Bryan Barberena, respectively, Northcutt emerged victoriously this past Saturday in Idaho versus Zak Ottow via knockout in the second round, after an exciting back-and-forth contest.

The win over Ottow puts Northcutt’s UFC record to 6-2, which, at 22, is nothing to scoff at. But, still, Northcutt is very much still a work in progress, like many young fighters are, and has plenty of time to mature and develop as a fighter, but competing at heavyweight just isn’t very likely or realistic for him.

Regardless of the weight class that Sage ends up competing in, he will most certainly have his share of supporters as he’s already developed quite the following in his young MMA career, most likely due to his time on Dana White’s Looking for a Fight series which saw Sage earn himself a shot in the UFC in the very first episode.

Sage Northcutt tipped the scale at 170 lbs on Friday … but he’ll be a helluva lot heavier in the future — as in the size of a 206+ lb. heavyweight — ’cause that’s where Super Sage says he’ll eventually fight.