Nearly five years ago, Tim Carpenter walked away from a rather successful professional mixed martial arts career at the early age of 32, but he did it on his own terms.  The Philadelphia native was signed to the Bellator MMA label, competing in six fights for the organization. 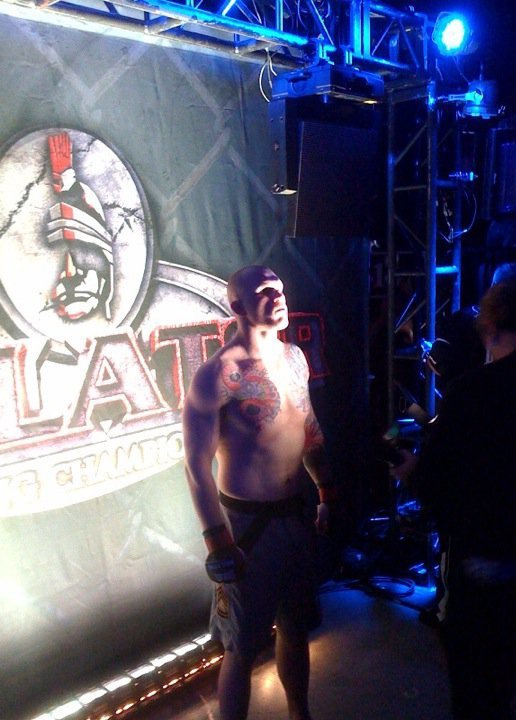 Carpenter never endured the hardships of sustaining back-to-back losses, however, on July 20, 2012, after a unanimous decision loss to Travis Wiuff at Bellator 72, the chapter had closed.

Now the owner of two Pennsylvania based MMA schools, Carpenter’s focus is solely on his students and their progressive development.  He owns Hellfish MMA in Chalfont, and the other by the same name in Bridgeport.

We caught up with Tim Carpenter to discuss the thought process behind his decision, and what the future may bring.

MyMMANews – When you walked away from the sport you were still very young, and to many it came as as a shock because you walked away after one decision loss.  It wasn’t like you were on the losing end of three or four consecutive knockouts in a row.  Can you shed some light as to why you decided to leave your career in the cage that night almost five years ago?

Tim Carpenter – “It was kind of like, I was just kind of done with it.  I didn’t want to fight anymore.  I never got into it to be like the UFC world champion or anything.  I just kind started fighting as a natural progression.  I did a lot of Judo competitions, Jiu-Jitsu competitions, and I felt like fighting was the next logical step.  I wanted to see how far I could get with it, and then after that loss…. it was a lot of training, and a lot of time that goes into getting ready for a fight.  Fighting in those Bellator tournaments was a pretty rough schedule too. They have you fighting every month.  It’s a tough way to make a living, and I was just kind of done with it.  And I never wanted to get to the point where I lost four or five in a row and I felt like I had to retire.  I always told myself that I wanted to retire with the ability to come back if I wanted to.”

MyMMANews – You mentioned fighting the Bellator tournaments and it being a grueling schedule. Bellator has had a complete facelift since you last fought for them.  New leadership, new format, no more seasonal tournaments.  And you’ve seen more growth and financial gain for fighters.  With these changes, does it change how you look about retirement and could we see you return to fighting?

Tim Carpenter – “Sometimes when I go to the fights I get the urge, but once I’m gone and I realize I don’t have to do all the shit that goes along with getting ready for a fight, I’m good with that.  I train pretty much six or seven days a week.  I’m training pretty much with all the guys that are coming up in MMA and Jiu-Jitsu.  My skills are still there.  I could still do it if I wanted to, so I always leave the option open but it’s not really in the front of my mind right now.”

MyMMANews – How do you manage time between the two gym locations?

Tim Carpenter – “I’ve got a great squad of assistant instructors.  I am usually in the Bridgeport school, Monday, Wednesday, and Saturday, and I’m in Chalfont school, Tuesday, Thursday, Friday.  We’re always closed on Sunday.”

The fight was contested under Muay Thai rules, and although she was on the losing end of a split decision, many in the crowd felt the decision could have gone the other way.

When not training at the world famous Rami Elite in Philadelphia, Lorinczy is instructing at Hellfish MMA.

When asked about his friendship with Rami Ibrahim, why Niki trains there, and not at not at Hellfish, Carpenter’s response made perfect sense and could serve as a relationship saver for any couple that practice that the martial arts.

Tim Carpenter – “We’ve always been friends.  I worked with Rami years ago.  He showed me some stuff.  He ended up training at the same MMA gym one day and I knew he was a great Muay Thai fighter, so he showed me some Muay Thai stuff and I helped him with a little bit of Jiu-Jitsu.  At the time I think he was fighting in some MMA fights, and we’ve always been friends, so when our old gym shut down, we had Muay Thai and Jiu-Jitsu there, my coach was her coach there as well.  He left the business, so she needed a new place to train.  She can get the work in at my gym, but it’s mostly big guys at my place.  I have a lot of heavyweights.  She needed more realistic for what she’s gonna face when she fights so I encouraged her to go check out other gyms, especially Rami’s.  She really liked Rami’s.  And it’s also better for us, because she is my girlfriend, I don’t necessarily want to be her coach too, that can lead to some issue.  I coach her in Jiu-Jitsu tournaments which she does for fun, and Muay Thai is her real passion, so she does that at Rami’s.  But she does help teach at my school when she’s not training at Rami’s.”

“We have a lot of heavyweights that come in and spar on Saturdays.  There’s a lot of meat walking around in there.  Everybody gets pretty sweaty.  It’s a small kind of gym.  It’s get pretty hot in there, but I’m always about making your training as hard as possible.  It’s usually hot when you fight under lights.  It gets hot in the ring.  So, it’s a good thing to get used to.  It’s almost like training at altitude.  It’s hard to breathe.  You are slipping everywhere.  It’s just a good environment to get better in.”

Running With the Bulls

“I did that a couple of years ago.  Fighting is a pretty exciting thing to do, and since I stopped fighting, I’m maybe missing a little bit of that raw excitement so every once in a while I gotta do something crazy.  I never planned on doing it.  We were going to be in Europe during the Running of the Bulls and wanted to check it out.  I didn’t plan on doing it, until we got there.  I figured you can’t really go there and not do it.  I probably wouldn’t do it again.”

Tim Carpenter began training in Judo in 1995 under State Champion, Joe Condello, and U.S. Olympic Team manager, Lou Moyerman. In 1997, he began training in Brazilian Jiu-Jitsu under Steve Maxwell and Phil Migliarese. With a combination of Judo and Jiu-Jitsu, Carpenter went on to become the U.S. Junior Olympic and Junior National Champion.

After being invited to train at the U.S. Olympic Training Center in Colorado Springs, as well as winning the PA State Championship, Carpenter switched his focus to Jiu-Jitsu Competition. He earned gold medals in the Pan American Championships, USA vs Brazil, Arnold Classic, and Gracie Worlds. He was invited to compete in the ADCC world championships of submission wrestling and placed 7th in the world, losing only to the eventual champion.

The next logical step was to transition to MMA. Jumping straight into the world of professional fighting without any amateur fights, Tim went undefeated in his first seven fights, defeating three World class Jiu-Jitsu black belts along the way, including Daniel Gracie and Guybson Sa. He was a semi-finalist in the first two Bellator MMA light heavyweight tournaments before retiring to focus on passing on the lessons he has learned from a lifetime of martial arts experience.

You can find Hellfish MMA at the following two locations:

Visit them on the web at HellfishMMA.com

By Mike Pendleton 9 mins ago