There is often a class or a teacher, that in the long run of someone’s career, they can look back upon and realize that that person’s guidance was what started them on their career path and ignited their passion. Sometimes it is recognized immediately, often times it is reflected upon much later. For Taylor Thompson, it was definitely later, actually several years later. And she definitely didn’t think an intro to MMA class taught at the University of Utah would be the class that would help find her passion.

“I signed up for intro to MMA, I had no idea what MMA was. I thought it was going to be like a week of Karate, a week of Akido, a week of Tae Kwon Do. Then when I started the class, Jeremy Horn was teaching it and it was a legitimate introduction to MMA,” Thompson said.

“I remember that Taylor was always one of the ones that was more interested in focused on training. Some of the others took the class as an easy credit but Taylor always was actually interested in learning,“ said MMA legend Jeremy Horn.

The class was taught at Horn’s gym, Jeremy Horn’s Elite Performance and not on the campus of the University of Utah. Taylor spent time with the fighters and even went to see one of them compete. There, for the first time, she saw what she was learning in action and how impactful it could truly be. But after the class was over, she didn’t do anything with the new skills she learned. Instead, she finished her undergraduate studies and moved to Massachusetts to become a wildlife veterinarian.

It was during that time that she was looking for a way to deal with her stress and the gym she found to do that happened to be owned by former UFC fighter Jorge Rivera. There she started mainly with jiu jitsu and after three or four months entered her first grappling tournament. After winning her division, she knew she loved it and wanted more competition. Initially those plans didn’t involve MMA but it was soon added to her agenda. It was also the beginning of her belief that she could be a professional athlete.

“I was just training jiu jitsu at first and I was doing it maybe three or four months and I signed up for my first grappling tournament. I was competing in the beginner’s bracket and ended up winning the bracket. I just had so much fun with it. That was the moment where I was like, I at least really enjoyed jiu jitsu, I was like I haven’t really done anything with striking yet. But what if at least keep on doing the jiu jitsu part and then I can try doing striking later and If it turns out I don’t like striking just keep going with jiu jits and try making an athletic career out of that.”

“It was kind of like after that first tournament that I was thinking of it as a possibility. After I started training striking and realizing that my long lanky arms are good for other things than choking people, that I was like, oh this can be kinda fun. I started dedicating a lot of time to it, I only finished up the one year of vet school and did not reenroll for the second year. I kinda had the mindset where, I can go back to vet school whenever but you can’t go back to an athletic career. So it was one of those now or never kind of decisions.”

Thus her venture into MMA as a fighter begun, though her mom, who has been and is still supportive of her didn’t fully understand stopping graduate school to punch people in the face.

“It was definitely a bit of a jump for some people,” said Thompson. “I think the exact quote that my mother said when I was talking to my mother about it was “ok, you’re dropping out of school where you were going to be a doctor to be a cage fighter?” and I said yes, that’s about it. And she said “okay…””

Thompson dove right into her career, she has been training in the sport of mixed martial arts for under two years now, has two amateur wins, including capturing the Cage Titans bantamweight title, she has her first defense of the title on June 30 and is looking to turn pro after that. However, just ten years ago, Thompson thought she would be an Olympic swimmer right now. But a shoulder injury got in the way.

“When I was in high school I thought swimming was going to be my sport. I was training with the intention of making the Olympic team. That was the goal but I ended up with a shoulder injury right at the end of my last season of my senior year. I kinda missed my opportunity to continue and get to college. They weren’t willing to sign me on to the team if I was going to be doing physical therapy for the entire school year.”

Around the time she was a junior in college, Thompson didn’t believe she would reach her dream of becoming a world champion. She pointed out tat as a swimmer, she wouldn’t be able to get the coaching needed without competing in college in order to make the Olympic roster.

As an MMA fighter, Thompson has had plenty of time to work with great coaches. Her home gyms are BST MMA & Fitness and Worcester MMA. For her upcoming fight, she is training at the famed JacksonWink Academy. She ended up there after checking out the gym while on vacation.

“It was kinda more of, JacksonWink takes in fighters and they have dorms to stay in and they take in fighters for camps and you don’t have to join their team and I was like hmm. So I started looking it up and sent them an email and I was like hey, I want to come check out the gym and we’re going to do some hiking and stuff while down there, a mini-vacation kind of thing but wanted to check it out and see if I could do a camp and they were like yea sure, we’d love to meet you. I showed up, trained for a week and they invited me to stay as long as I liked.”

Part of the reason Thompson decided to train at JacksonWink was because she lacks female training partners in Massachusetts as she is the only female MMA fighter on either of her teams. At JacksonWink, she has been able to train with some of the best female fighters in the world. She was a part of Katharina Lehner’s training camp for Lehner’s bantamweight title fight for Invicta FC in early May, she also trained with UFC fighters Michelle Waterson and Yana Kunitskaya.

Training with some of the toughest fighters in the sport proved to Thompson that she isn’t as far off as she thought she was from achieving her goals of becoming a world class fighter.

“I definitely think that training with these amazing fighters over here has showed me not just how much I can learn but how much I already know. I might need a little bit more time before I’m ready to sign a UFC contract or what, but I think it’s not as far off as I originally thought.”

But what may be most telling about her trip to New Mexico is that one of her coaches, Max Simone from Worcester MMA and a teammate from BST Kris Moutinho made the trip to help support her training camp. This isn’t the only example of the level of support Thompson has garnered so early in her career, even before she entered her first jiu jitsu tournament a sponsor saw her potential.

Thompson has been training for only about a year and a half now and hasn’t turned pro yet as well, which makes the dedication to her by her coaches, teammates and sponsors a clear testament not only to her talent but more so of her character.

When talking about her quick rise, she is quick to mention it’s the hours she has put into her passion alongside the help of her coaches and teammates. She also has brought her academic approach to learning which she feels has helped her progress quickly.

“I’ve trained myself how to learn. So many fighters are very smart, but I think going through the level of school I had to go through has taught me how I learn. I can capitalize on knowing my learning style very well where maybe other people haven’t had that opportunity for self-reflection.”

That has paid off as she is 2-0 with both victories coming by a finish. In her second fight, Thompson was supposed to fight Kylie O’Hearn for the Cage Titans bantamweight belt but O’Hearn was forced out due to an injury. Instead, Thompson faced O’Hearn’s teammate Tiffany McCoy and defeated her by a submission in the first round. After that fight, Thompson was initially going to turn pro but after thought that the O’Hearn fight would be a good final test for her. So now the fight is on and she will defend her belt against O’Hearn on June 30.

Thompson thinks it’s a good matchup that the fans will enjoy and it will end with a finish.

“I think it will be entertaining no matter the outcome.”

“She’s tough as nails, people have hit her with everything they’ve had and she didn’t go down.”

“I think it’s going to turn into both of us trying to knock the other one out and its whoever gets there first.”

With the fight coming up, that is Thompson’s main focus but there is a plan starting to take shape for her future. There is a high possibility this will be her last fight as an amateur. She is also figuring out what percentage of time she will spend in New Mexico for training camps compared to her home in Massachusetts. But if the past year and a half are any indication of what’s to come, those who know Thompson are confident she will make it work.

Her first teacher, Jeremy Horn said Thompson is the only person he taught at the University to pursue fighting as a career. He is thrilled for her success and has a little bit of advice for her.

“I’m glad to see that she’s doing well. It’s always been a High Point for me when I can introduce people to the sport of MMA.”

“I would just encourage her to stay focused and not get distracted by things that don’t matter.” 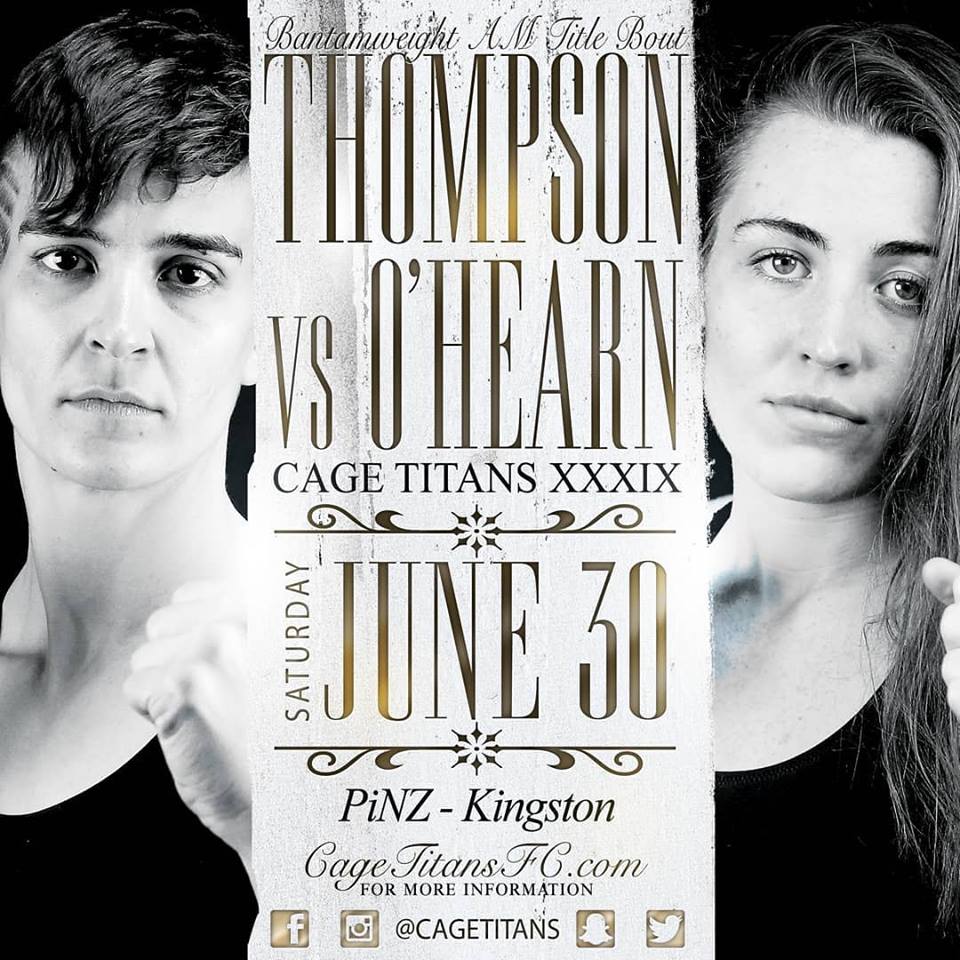 By Edward Carbajal 11 mins ago