On June 15 at Twin Rives Casino in Lincoln, Rhode Island, Kris Moutinho will make his seventh appearance in the CES cage at CES 50.  He will do so alongside many of his teammates from BST Fitness including Jose Lugo and Maria Rivera. Moutinho knows MMA is an individual sport but performing on a large stage with his teammates means a lot to him. 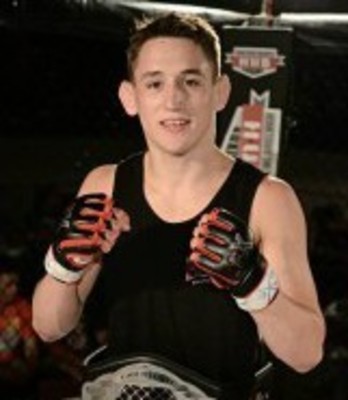 “Everything with a group of friends you care about means more. It’s one of these things, having these guys coming with me, pushing each other and grinding, it means so much to me, it means the world.”

Moutinho has a special relationship with fellow CES fighter Richard Santiago, they have been best friends since the seventh grade.

“I decided I wasn’t using my brain for anything else, I might as well get punched in the head.”

But when Moutinho signed up for classes at Jorge Rivera’s gym, he had no intention of competing professionally. However, the more he got into it, the desire to compete picked up, because that’s just who Kris Moutinho is.

“If I like it it’s gotta be a competition. It’s how it’s always been.”

It also turned out that Moutinho was pretty good at it. He went 6-2-1 as an amateur, only losing to top prospect Marquis Brewster and current UFC fighter Manny Bermudez. Those two fights taught him a lot about himself.

“They were eye openers. I fought Marquis my second fight ever. It was my second amateur fight. I train with him all the time now, he’s a good kid, it was a good experience. It made me really focus on learning how to punch. By the time I fought Manny, it was one of those things, like I had a few wins after that. I got in the mindset I was like, I’m untouchable, I’m going to run through Manny. When Manny beat me, it was another one where I was like, maybe I have to take a step back and really focus again.

Then he decided to turn pro and started his pro career on fire. Winning his first four pro fights within seven months. He continued to take fights at a rapid pace but lost his next two fights against tough veterans. Moutinho said he felt untouchable again after his fast start.

“You think once it happens once it’s never gonna think like that again. But the human mind is one of those things it likes to bite you in the ass sometimes.”

But he did find important takeaways from his losses, and that’s to go back to his roots.

“Punching people is fun, getting punched is fun, it’s something I really enjoy. I don’t mind the nitty gritty of getting hit. I definitely side a way from my wrestling and jiu jitsu, it wasn’t my thing for a while. I’m starting to realize if it’s what I want to do for the rest of my life, I have to get that out of my head and focus on what I’m doing.”

Moutinho now has to focus on Al Jones at CES 50 on June 15. Jones recently fought for CES at CES NY on May 4 and improved his record to 3-3 with a unanimous decision victory over Quentin Gaskins. Though Moutinho didn’t want to make a prediction, he likes the matchup

His last fight looked exactly how I’d want to fight. Didn’t shoot much, if he does shoot good, I’m ready for it. But he didn’t shoot much, he likes to bang that’s what I like to do. I want to throw punches. Hopefully he’s willing to do it. Willing to keep those hands up and bite down on that mouth piece and let’s go.”

“I’m looking get a finish, I’m not looking to go to a decision.”

In addition to training with his BST teammates, Moutinho has also been sparring at Tri-Force MMA and Lauzon’s with fighters such as Rob Font. Mouthinho’s goal is to join Font in the UFC and he believes he can be there soon.

“I want to be in the UFC within the next year, year and a half, two years so I’ve gotta get going.”

Kris Moutinho fights on June 15 for CES MMA. The main card will be aired on AXS TV.

By 'Beautiful' Bob Meloni 3 mins ago