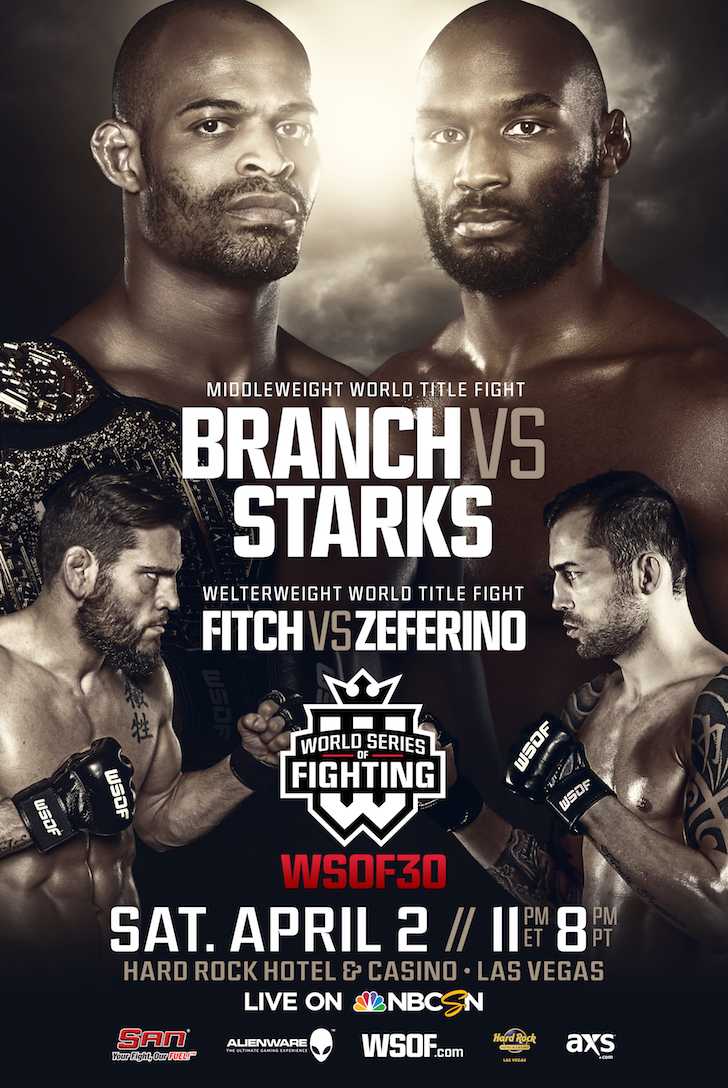 Priced from $29, tickets for WSOF30: Branch vs. Starks, are available for purchase online at WSOF.com and AXS.com.

In other action on the four-fight, live NBCSN telecast, submission expert Vinny “Pezao” Magalhaes (13-7) will square off with Jake “The Honey Bear” Heun(9-4) in a light heavyweight (205 pounds) contest, while World Series of Fighting newcomer and knockout artist Abu “Gladiator” Azaitar (11-1-1) will throw down with Danny “Dee1” Davis, Jr. (11-10-1) at welterweight.

The complete WSOF30 preliminary bout card will be announced soon.

The 6-foot-1, 34-year-old Branch of Brooklyn, N.Y. made history in his last start at WSOF23 on September 18, 2015 when he notched a first round (2:21) submission (rear-naked choke) victory over Teddy Holder to become the first World Series of Fighting light heavyweight champion in history as well as the first-ever two-division champion in promotional history.

Also 34 years of age, the 5-foot-10 Starks of Tempe, Ariz. earned a shot at Branch’s middleweight title after three consecutive victories in the World Series of Fighting decagon cage.  In his last effort at WSOF23, Starks handedKrasimir Mladenov the first defeat of the Bulgarian wrestling standout’s career by way of unanimous decision.

Starks is riding a five-fight win streak that began with two consecutive wins under the promotion of Bellator.

A former world top 10 ranked competitor who has faced and defeated a collection of rival icons over the course of his 14-year professional career, the 6-foot, 38-year-old Fitch of Fort Wayne, Ind. earned a unanimous decision in his last appearance, over fellow accomplished superstar Yushin Okami at WSOF24 on October 17, 2015.

Originally from Florianopolis, Santa Catarina, Brazil, the 5-foot-11, 30-year-old Zeferino who fights out of Middletown, N.Y. has notched 15 of his 20 career wins by way of submission.  Zeferino demonstrated superior physical and mental toughness in his last appearance in the cage, going to battle three times in one night in the one-night, eight-man lightweight (155 pounds) tournament at WSOF25 on November 20, 2015.

After defeating both Brian Foster and Jorge Patino by way of heel hook submission in the first round of action in the quarterfinal and semifinal stages of the tournament, respectively, Zeferino again faced off with Foster, who had advanced to the championship stage as a “lucky loser,” but suffered a second round (4:51) KO (punches) at the hands of Foster in a barnburner affair.

Magalhaes of Las Vegas via Rio de Janeiro, Brazil, will make his second start under the promotion of World Series of Fighting after pulling off a stunning, first round (1:08) submission (kneebar) of wrestling stylist Matt “The Hammer” Hamill at WSOF24.

A 6-foot-3, 31-year-old world grappling champion, Magalhaes has claimed 11 of his 13 career MMA wins by way of submission and is looking for his fourth consecutive victory.

Heun of Coconut Creek, Fla. is seeking his third straight win after edging out a split decision over Clinton Williams at WSOF26 on December 18, 2015.

A member of South Florida-based American Top Team, the 6-foot-2, 28-year old Heun has claimed 6 of his 9 professional wins by way of (T)KO or submission.

The number one ranked middleweight (185 pounds) in Germany and the number five ranked middleweight in Poland, the 5-foot-11, 30-year-old Azaitar of Cologne, Germany will enter the World Series of Fighting decagon cage for the first time at 170 pounds, after tearing through the ranks of competitors in Europe over the last seven years.

To date, the heavy-handed Azaitar has notched 7 of his 11 career wins by way of (T)KO.  His lone defeat came in 2012, and he has since remained unbeaten in his last 8 starts.

Davis, Jr. of Las Vegas will look to rebound from two consecutive losses – a split decision defeat at the hands of Matthew Frincu at WSOF23, and a unanimous decision loss to Abubakar Nurmagomedov at WSOF26.

Prior to the matchup with Frincu, the 6-foot-2, 33-year-old Davis, Jr. had run to five straight wins, three of which were World Series of Fighting contests.