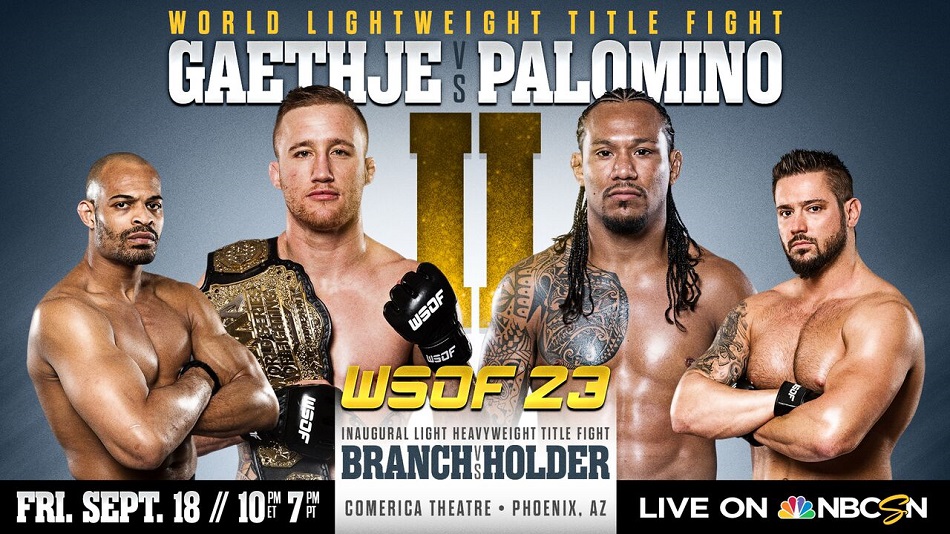 LAS VEGAS (September 14, 2015) – Two Tucson, Ariz.-based fighting prospects – Kamuela Kirk and Brian Grinnell – have been given the shot of a lifetime after injuries have rendered Isaac Vallie-Flagg and Kelvin Tiller ineligible to compete in their respective  “WSOF 23: Gaethje vs. Palomino II” preliminary card bout commitments at Comerica Theatre in Phoenix, Ariz. on Friday, Sept. 18.

Kirk (4-1) will replace Vallie-Flagg, who sustained an elbow injury, in the scheduled lightweight (155 pounds) contest against Estevan Payan (16-8) of Tempe, Ariz., and Grinnell (8-6) will fill in for Tiller in the scheduled middleweight (185 pounds) matchup against undefeated Vagab Vagabov (19-0) of Dagestan, Russia.

The 21-year-old Kirk, who will make his fourth start of 2015, is coming off of a powerful performance on July 19, when he scored a first round (3:17) TKO on Edgar Escarrega with a barrage of knee strikes.

Kirk produced submission victories in each of his first three starts.  His only defeat, thus far, came via split decision in February.

Originally from Shawnee, Okla., the 27-year-old Grinnell (8-6) is an expert on the mat who has claimed 6 of his 8 professional career wins by way of submission.   In his latest effort, a July 24 matchup against Levi Queen, Grinnell forced Queen to tap out in the first round (2:59) of battle.

The WSOF 23 seven-bout preliminary card will stream live on an embeddable video player on WSOF.com.

Priced from just $39.99, tickets for “WSOF 23: Gaethje vs. Palomino II” are on sale at the Comerica Theatre box office and online at WSOF.com and Ticketmaster.com.

In the main event, undefeated, reigning World Series of Fighting Lightweight (155 pounds) Champion Justin “The Highlight” Gaethje (14-0) will collide for the second time with hard-hitting rival Luis “Baboon” Palomino (23-10), after the two engaged in an all-out war, which has already been touted as a “Fight of the Year” candidate, in the main event of WSOF 19 at Comerica Theatre.

In the co-main event and inaugural World Series of Fighting light heavyweight (205 pounds) championship bout, David Branch (16-3), the promotion’s reigning world middleweight (185 pounds) champion, will attempt to become the first two-division kingpin in World Series of Fighting history, when he faces off with Cinderella story Teddy Holder (9-1), whose nine career wins have all come by way (T)KO or submission.

Doors at Comerica Theatre will open at 3 p.m. MT and the first preliminary bout will begin at 3:45 p.m.

Atlas Fights 54 Set For the Beach

By Matt Bricker 3 hours ago

By Kristen King 5 hours ago

Was Poirier the Biggest Challenge of Hooker’s Week?

By Pat Donohue 9 hours ago