It seems nobody can beat Ronda Rousey – not even tennis superstar Serena Williams.

The UFC women’s bantamweight champion knocked out the 21-time Grand Slam singles champion in a fan poll on ESPNW.com for the title “Best Female Athlete Ever.” 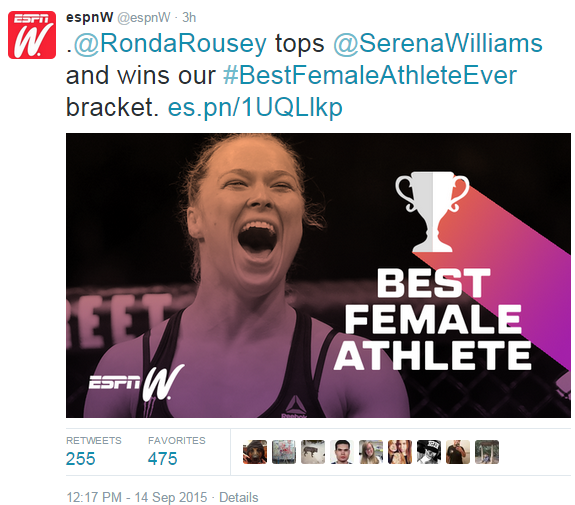 The final, which had more than 13,000 votes tallied according to ESPNW, concluded a 32-woman bracket style tournament where fans got to vote in each round. To reach the finals, Rousey earned fan support to edge out Olympic swimming prodigy Missy Franklin, heptathlete legend Jackie Joyner-Kersee, WNBA and college basketball superstar Diana Taurasi and quite possibly the fastest woman in the world, Olympic track athlete Florence Griffith Joyner.

Williams, who came just short over the weekend in her bid to become the first woman to win a calendar-year Slam since 1988, lost to Rousey by a 52-48 margin in the final vote.

Rousey will get to show what made fans vote for her as the greatest female athlete ever on Nov. 14 when she squares off against Holly Holm at UFC 193 to be held at the Etihad Stadium in Melbourne, Australia.

Is Ronda Rousey the best female athlete on the planet?  Of all time?  How long will her status last?  Who can dethrone her?

Kevin Holland to fight this weekend against Joaquin Buckley

Amir Aliakbari signs with ONE Championship