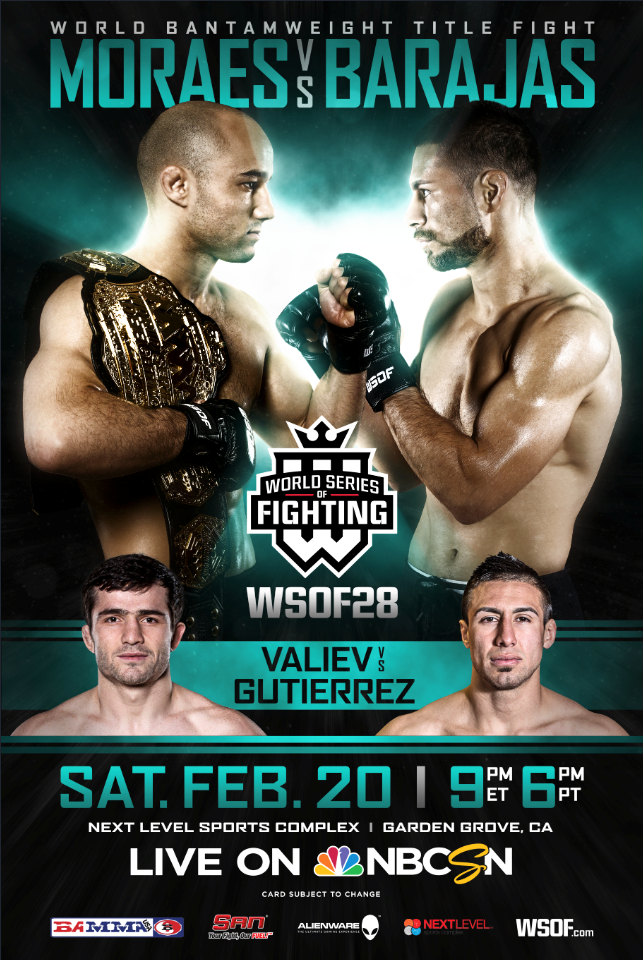 In the bantamweight co-main event at WSOF28, Timur “Lucky” Valiev will put his 10-fight win streak on the line against fellow rising star Chris “El Guapo” Gutierrez, who is unbeaten in his last 7 starts.

“Beginning with Marlon Moraes, the top dog in the division, the 135-pound superstars are going to be out in full force with a lot at stake at WSOF28,” said World Series of Fighting President Ray Sefo.

The prolific, 27-year-old Moraes (15-4-1) of Nova Friburgo, Brazil retained his crown for the second time on August 1, 2015, submitting Sheymon Moraes with a rear-naked choke in the third round (3:46) of their matchup.

Since the inaugural World Series of Fighting event on November 12, 2012 when he earned a split decision over decorated superstar Miguel Torres, Moraes, a Brazilian Jiu-Jitsu black belt and former Muay Thai champion,  has been unstoppable defeating several seasoned adversaries along the way, including Tyson Nam, Cody Bollinger, Josh Hill and Josh Rettinghouse, whom Moraes defeated by way of unanimous decision to become the first-ever World Series of Fighting bantamweight kingpin on March 29, 2014.

Barajas (12-1) of Vista, Calif. is coming off his World Series of Fighting debut on November 20, when he scored a third round (4:06) TKO (punches) on Erik Villalobos at WSOF25.

Beginning with his professional debut on February 20, 2011 when he submitted Robert Carlos with a triangle choke in the first round (1:32) of action, Barajas was perfect for over two years, running to 10 consecutive wins, a streak that culminated with his explosive, first round (:51) TKO (punches) of Leonte King on September 21, 2013.

Fighting out of the famed Jackson-Winklejohn camp, the 26-year-old Valiev (10-1) of Makhachkala, Dagestan, Russia has remained undefeated since his second professional start on July 22, 2011, and has racked up four consecutive wins under the World Series of Fighting banner in his last four efforts.

In the first of two appearances in the decagon cage in 2015, Valiev scored a devastating, first round (1:39) TKO on Ed West with a barrage of elbow strikes and punches at WSOF19 on March 28.  Valiev closed out the year with a unanimous decision victory over Tito Jones at WSOF23 on September 18.

The number one ranked bantamweight in the state of Oklahoma, Gutierrez (8-1-1) of Greenville, Texas is a ferocious, 24-year-old striker who has earned five of his eight professional career wins by way of TKO, with each of the five finishes having come with an onslaught of punches.

Gutierrez is coming off his second straight, unbeaten year as a professional, claiming two wins in 2015.  In his last start, he earned a unanimous decision over Bendy Casimir on August 22.