Canelo Alvarez, the biggest name in boxing, was reportedly granted relief from his contracts with DAZN and Golden Boy Promotions. The bombshell news dropped on ESPN Deportes and was confirmed by Canelo’s manager.

Canelo Alvarez filed the lawsuit earlier this year amid frustrations with DAZN and Golden Boy failing to get an opponent for the champion during the pandemic. Canelo wants to fight and he states he’s being hindered by the suits behind the two against him in the lawsuit.

Now there will be a bidding war for the four time champion to land him somewhere. Being the biggest name in the sport, Canelo Alvarez will draw eyes wherever he goes.

Also rumored, now that Canelo is a free agent, he’s seeking a fight with IBF champion, Caleb Plant. Canelo and Plant are also rumored to fight on December 19th.

Below is the release from Canelo’s manager, Eddy Reynoso: 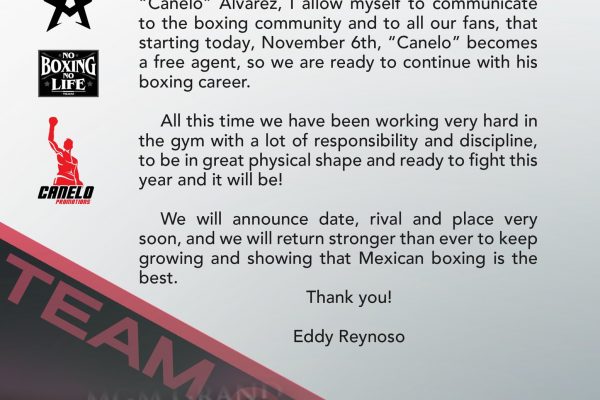 Canelo Alvarez has been trying to get a fight with a big name since his last win over Sergey Kovalev. Names mentioned have been Billy Joe Saunders and  Callum Smith. Canelo alleged that both Golden Boy and DAZN failed to find him his meaningful fights.

In addition to the refusal of Saunders and Smith, it was reported that DAZN considered only premium opponents for Canelo which were out of this world. They included GGG, Khabib Nurmagomedov and Jorge Masvidal, three fights that make no sense for Canelo.

Now that Canelo is free to fight and not held up with contract disputes, he is free to box where he wishes. While many will be aiming to land Canelo, it is completely possible that he takes the Mayweather route and self promotes from this point on as well.

Stay posted to My MMA News for all the latest surrounding the lawsuit, Canelo Alvarez and his next fight and more! Thanks for reading!

By Mike Pendleton 5 days ago

The Rematch is Official: Oleksandr Usyk vs. Anthony Joshua 2 set for August 20

By Bjorn Morfin 2 weeks ago